chichen itza pyramid – the mysterious 7th wonder of the world 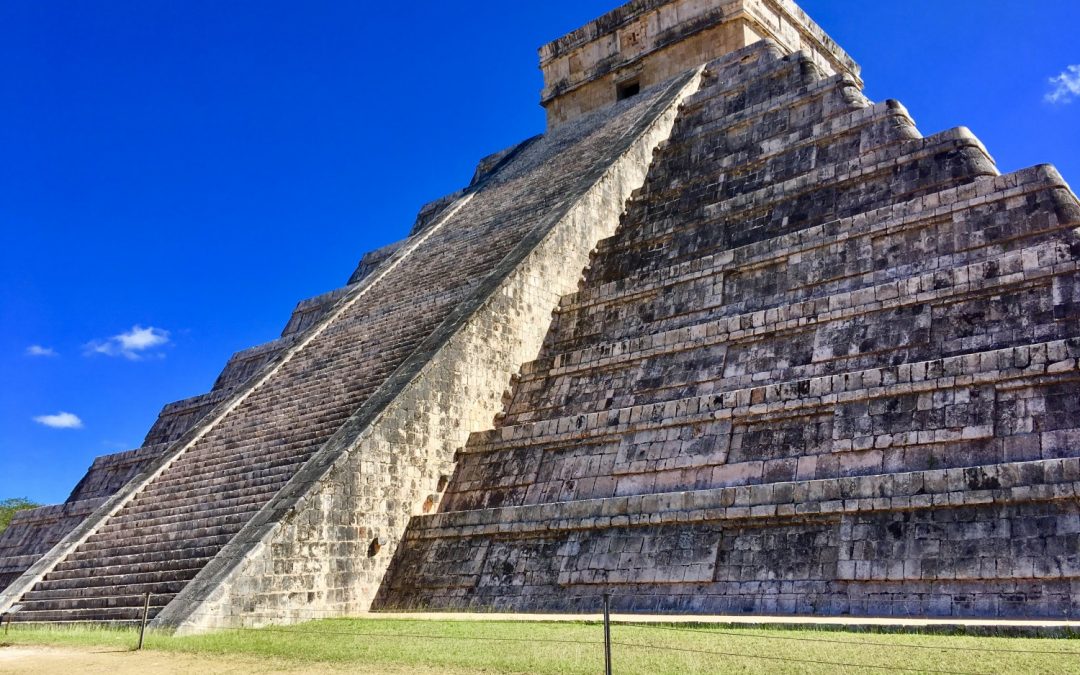 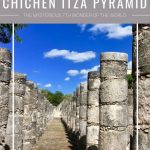 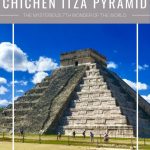 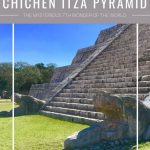 Remember when the world was supposed to end on December 21, 2012? That prediction was derived from the ancient Mayan calendar, which was so advanced that it could predict that every 5,126 years all of the planets would be in perfect alignment. How could an ancient people have such incredible knowledge of astronomy and math? This question has been haunting me ever since my recent visit to the Chichen Itza pyramid, in Yucatán, Mexico. 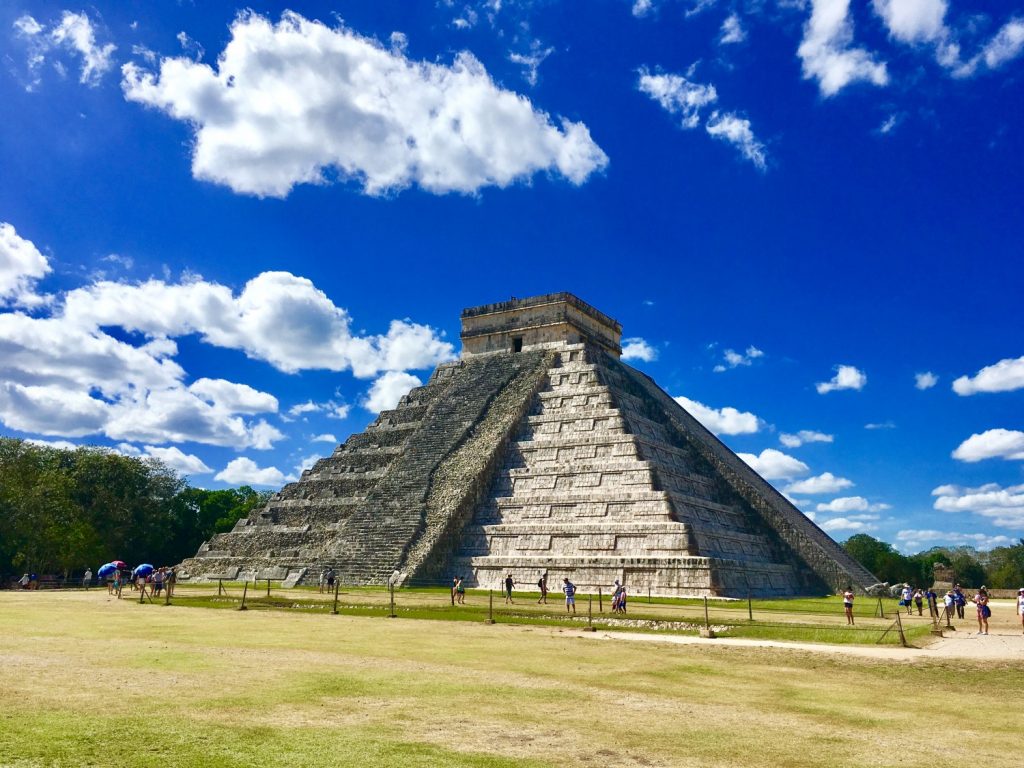 It’s incredible that over 1000 years ago, the Mayans could predict rare astronomical events such as solar eclipses and equinoxes. They didn’t even have telescopes back then as far as we know. They appear to have learned all of this by studying how the sun, moon and stars traveled across the sky and how shadows on the ground changed over time. Imagine how connected to nature the Mayans had to be to learn these things on their own. We admire the Mayan connection to nature and rely on nature’s gifts on a daily basis to maintain our own personal health. 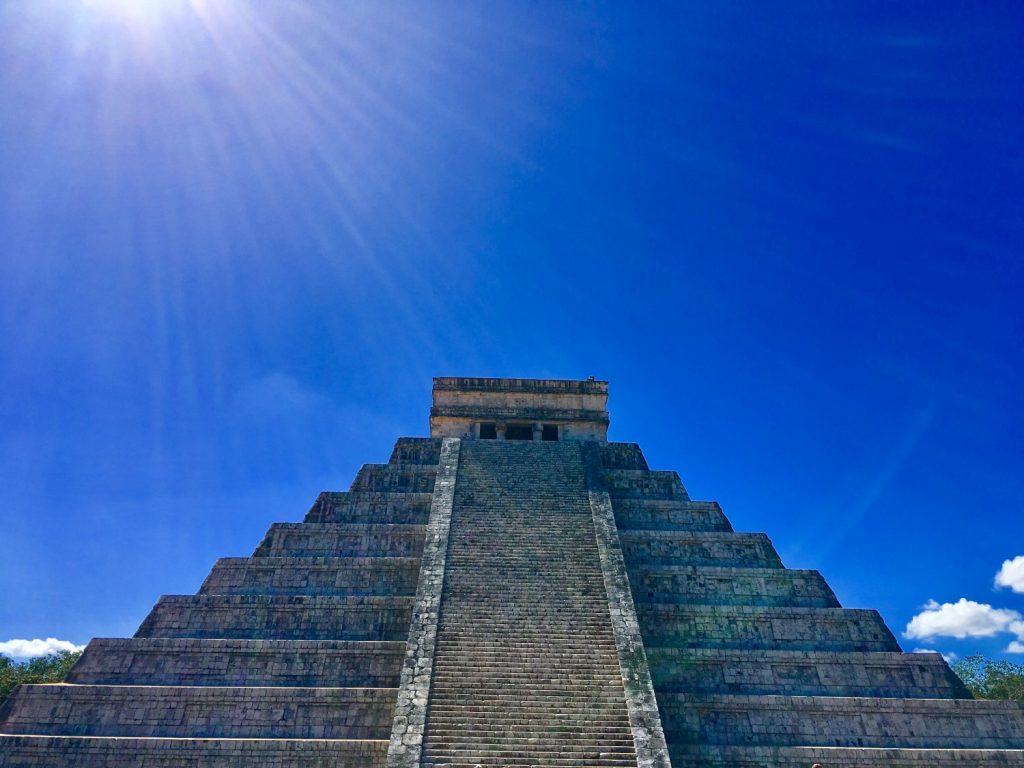 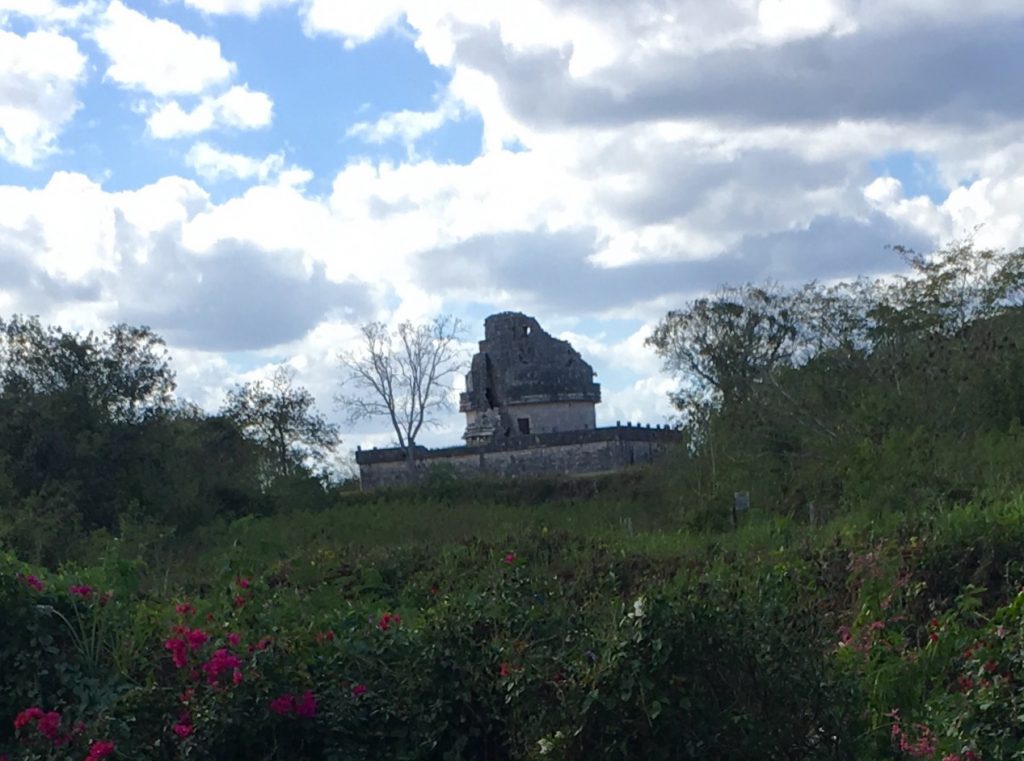 The Chichen Itza pyramid (called El Castillo or Kukulkan) was built around 800-1000 AD as a three dimensional representation of the Mayan calendar. The pyramid faces slightly east of true north. Its positioning is believed to account for the roughy 23.5 degree tilt of the earth on its axis. It has 365 steps representing the solar calendar year (91 steps on each of four sides plus the top). Research using imaging is still exploring the insides of the pyramid. However, our tour guide indicated that there is a similar but smaller pyramid inside that has 260 steps representing the lunar calendar. Finally, he also indicated that here is a third even smaller pyramid inside the second pyramid with 52 steps representing the weeks in the solar year. 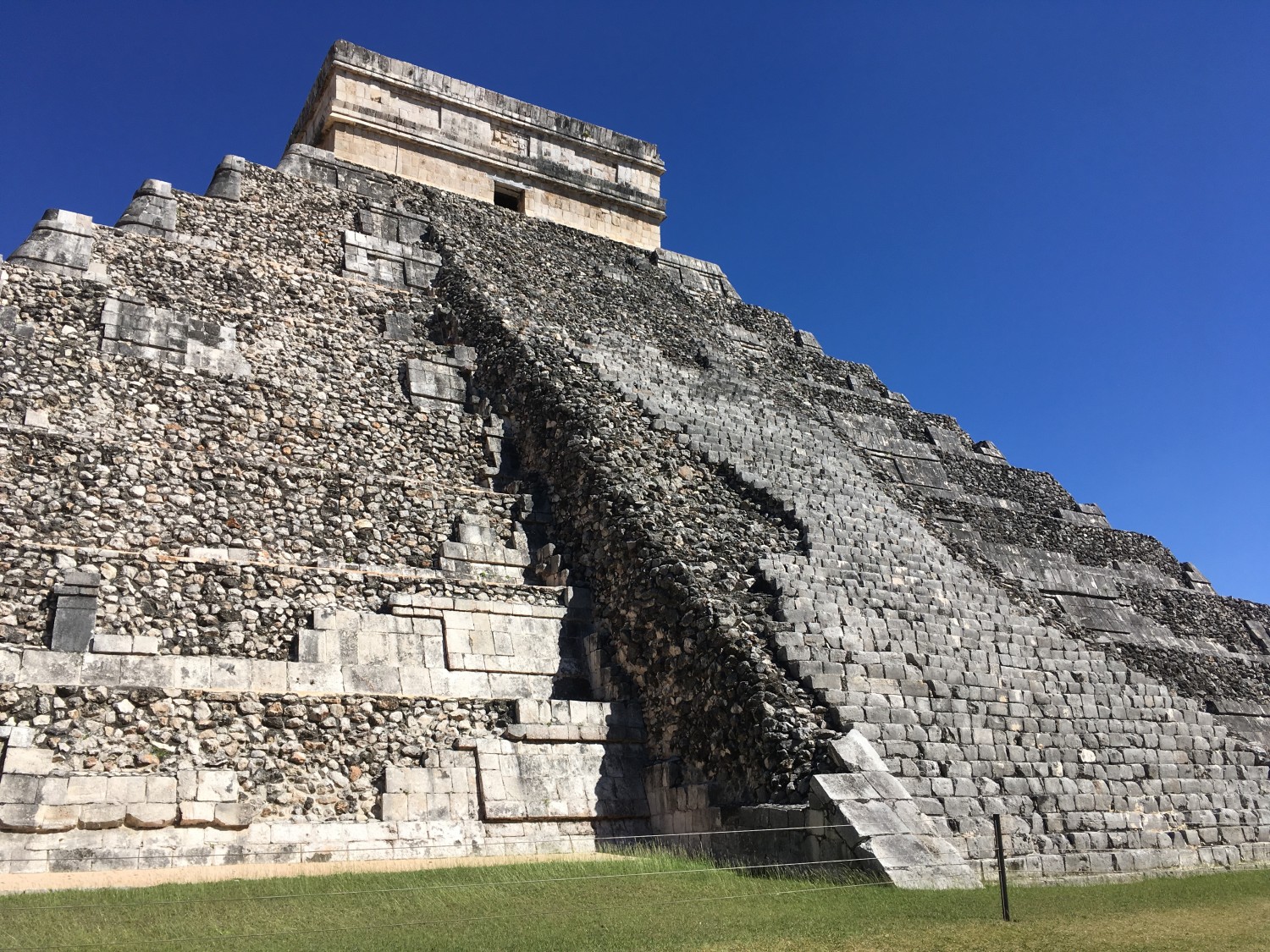 a snake appears during the equinox

Even more amazing, it forms a snake shadow twice a year during the equinox on September 21 and March 20. The snake appears to slither down the pyramid and connects to the head of the snake statue at the bottom of the pyramid before disappearing. How could an ancient people construct such an amazing three dimensional calendar? Thousands of Mayan people gather at the Chichen Itza pyramid twice a year to watch this amazing event. 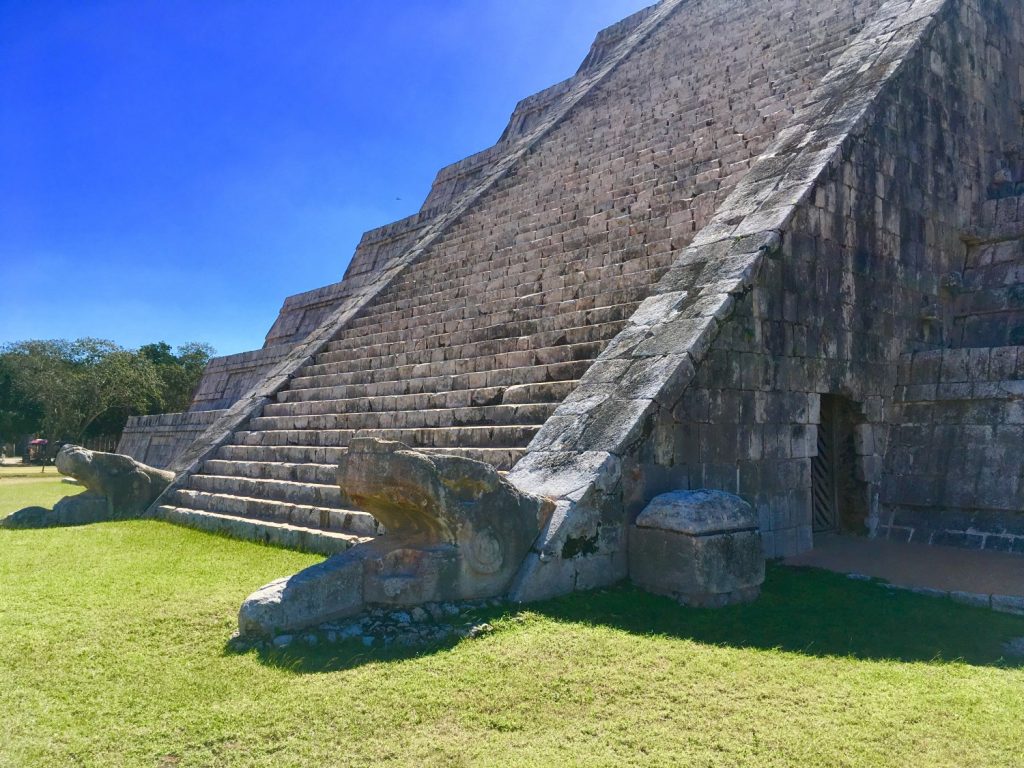 during the equinox, a shadow of a snake body slithers down the pyramid and connects to the statue of the snake head

The walls of the pyramid and surrounding structures also create amazing acoustical echos. This enabled ancient Mayan leaders to speak to all of the people as they gathered around the pyramid. It’s easy to imagine how the leaders would appear godlike as they spoke loudly to summon the snake shadow.

the lost history of chichen itza

Around 1250, the city of chichen itza collapsed and the people appear to have left or disappeared for unknown reasons. Speculations include drought or conquest by rivals. After the Mayans left, the jungle trees grew and covered Chichen Itza causing the stone structures to fall apart. It wasn’t until the 1800s that an American archaeologist explored the area and wrote a book that reignited interest in the ancient Mayan city. In the 1900s, Mexican archaeologists began restoring it and it was opened to the public. 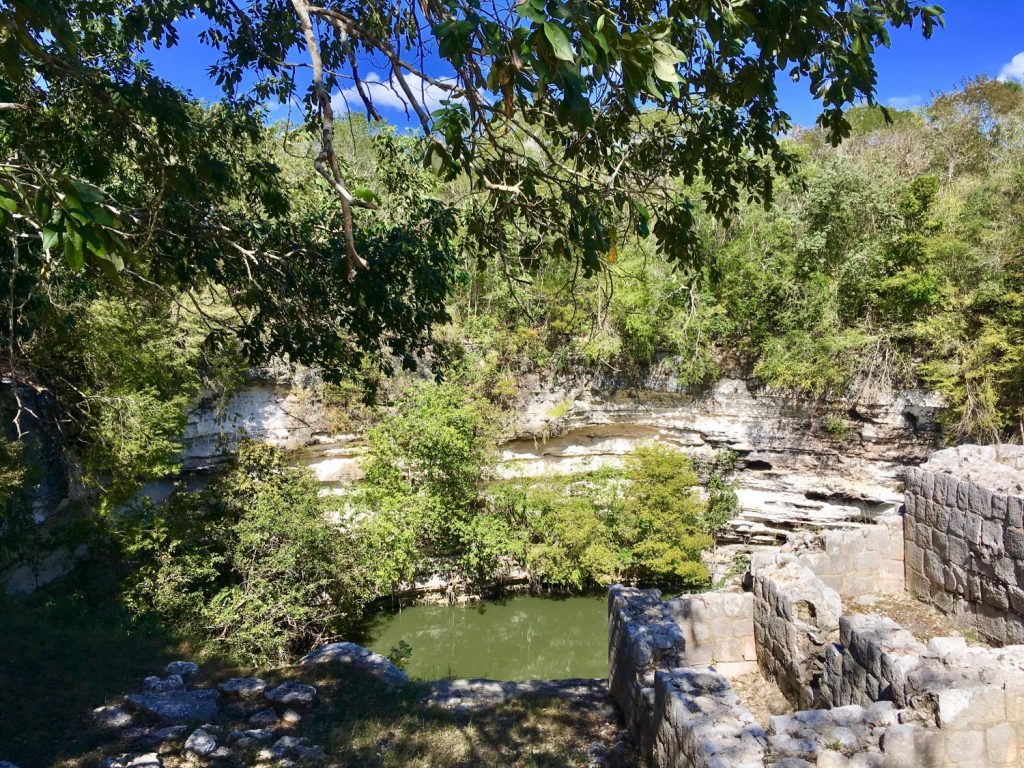 Unfortunately, much of what we know about the ancient Mayan civilization is speculation. When the Spanish arrived in the Yucatán in the sixteenth century, they burned the recorded Mayan history because they did not approve of their belief in many Gods. 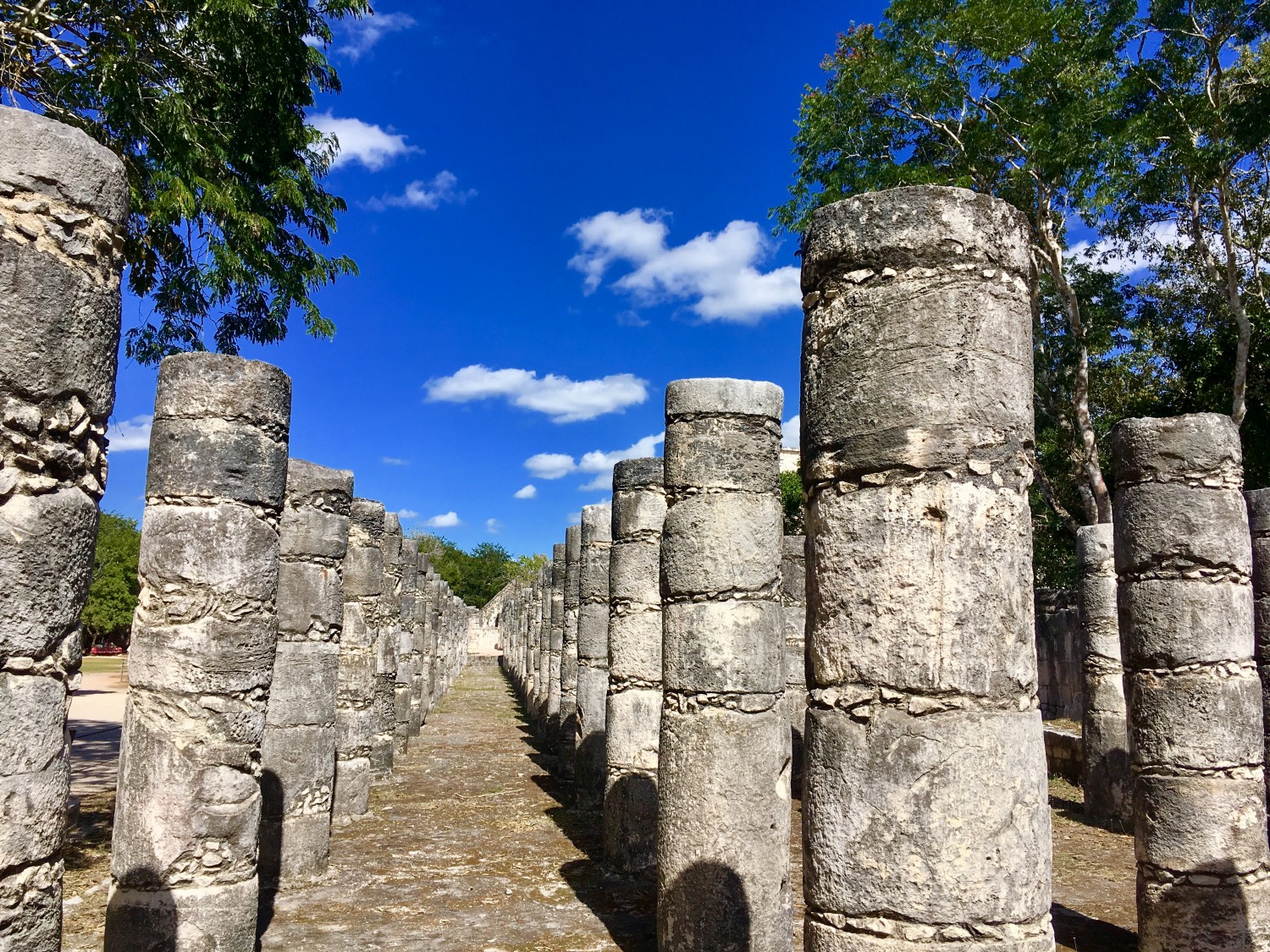 the plaza of a thousand columns at chichin itza

The Mayans continue to amaze me though. Everywhere I travel I buy my daughter a turtle figurine. I don’t know why she likes turtles but she does. On this trip, I was so amazed by the Mayan culture that instead of a turtle, I ordered a personalized Mayan lunar horoscope and astrological chart for my daughter’s birth date. When they delivered the calendar four hours later, guess which animal was on the calendar to represent my daughters date of birth? Yep, the turtle! Coincidence? As I read the Mayan description of the turtle, I was stunned. I could have written it myself about my daughter. 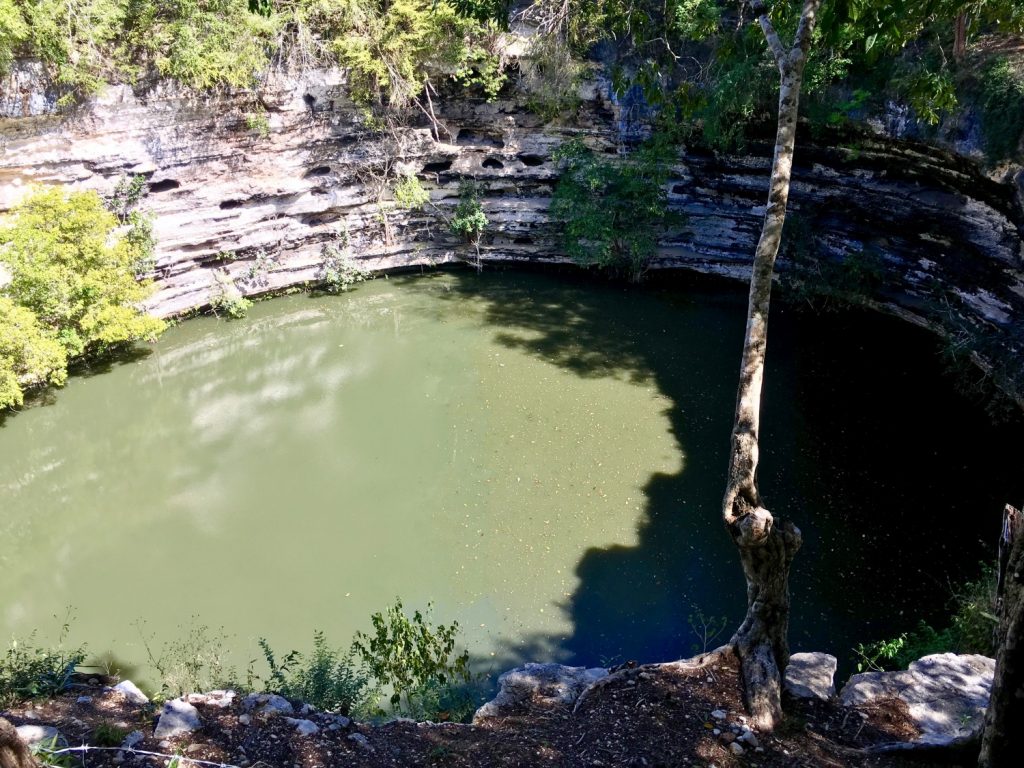 how to see the chichen itza pyramid?

Chichen Itza is about 2.5 hours from Cancun, Tulum, or Playa Del Carmen by car. We recommend paying for a guided tour as it is hard to fully appreciate the ruins without an expert to explain the astronomical significance of the ruins.