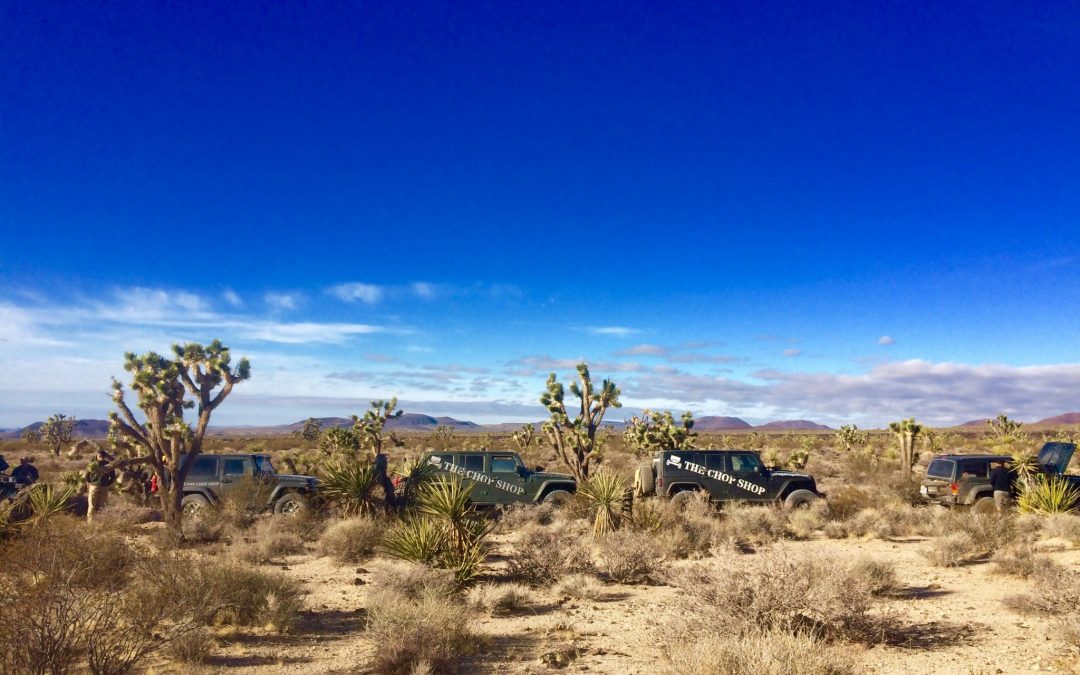 mayhem on the mojave trail

5 jeeps and a prius in the mojave desert

Life doesn’t hand you a lot of gifts. Even when it does you have to have the insight to recognize them and the motivation to seize them. When Sesar put the word out that he was gonna jeep the Mojave Trail, I pulled some strings to make sure I could be there. 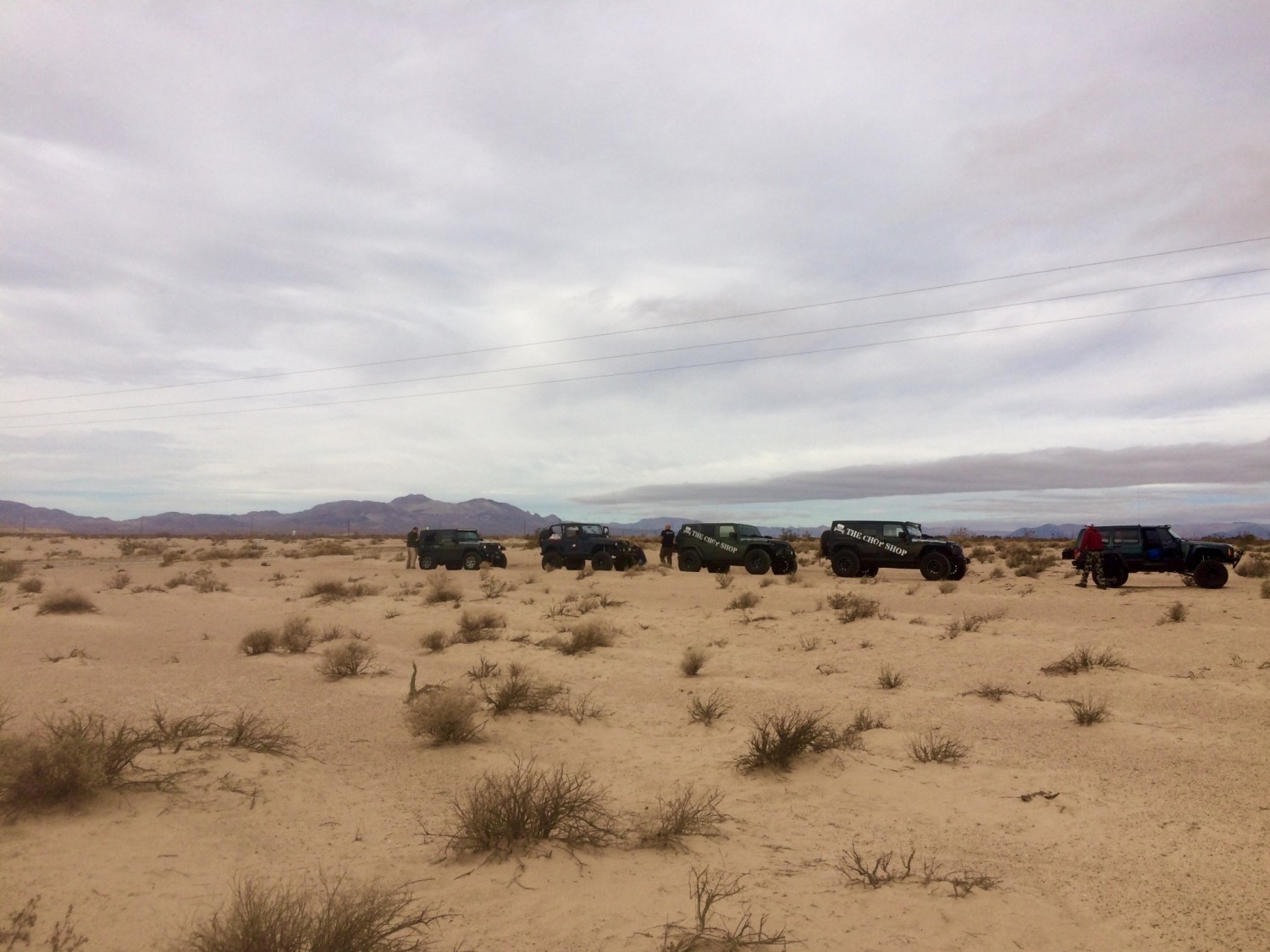 Did I even know what the Mojave Trail was? Not at all, but I knew it would be an experience that I didn’t want to miss. I stopped collecting assets 4 years ago and started collecting experiences instead. Sesar took me on my first jeep expedition a few months earlier to the Rubicon trail. That trip opened my eyes to the beauty and excitement of exploring nature from the comfort of a jeep. While it doesn’t provide the health benefits of hiking, you can cover more ground and it’s easier to carry beer. 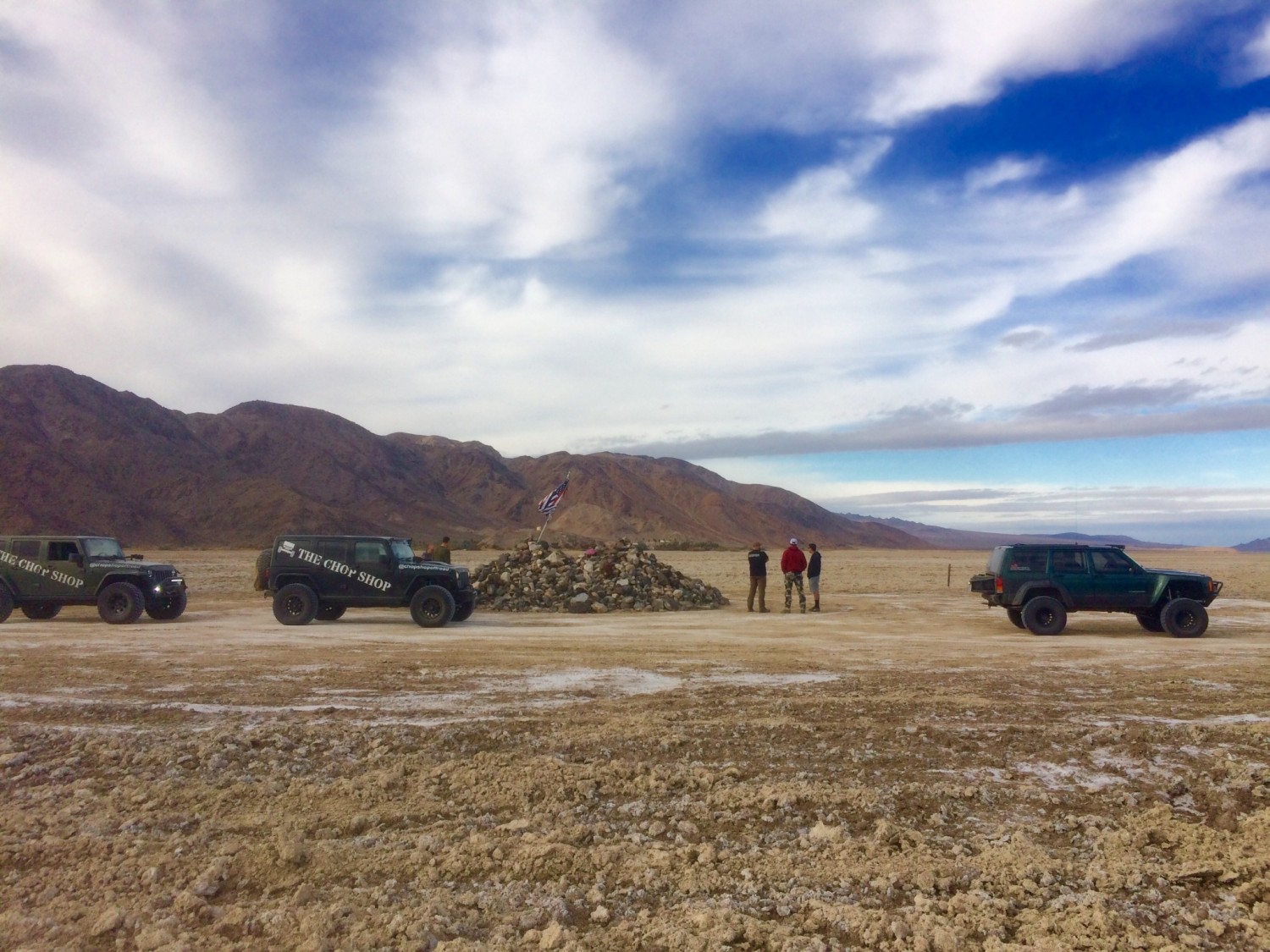 I’ve never been a jeep enthusiast and never had an interest in cars. It’s an expensive hobby and requires mechanical know-how. We have always owned practical cars like the Honda Civic and the Prius. Sesar hates practical. 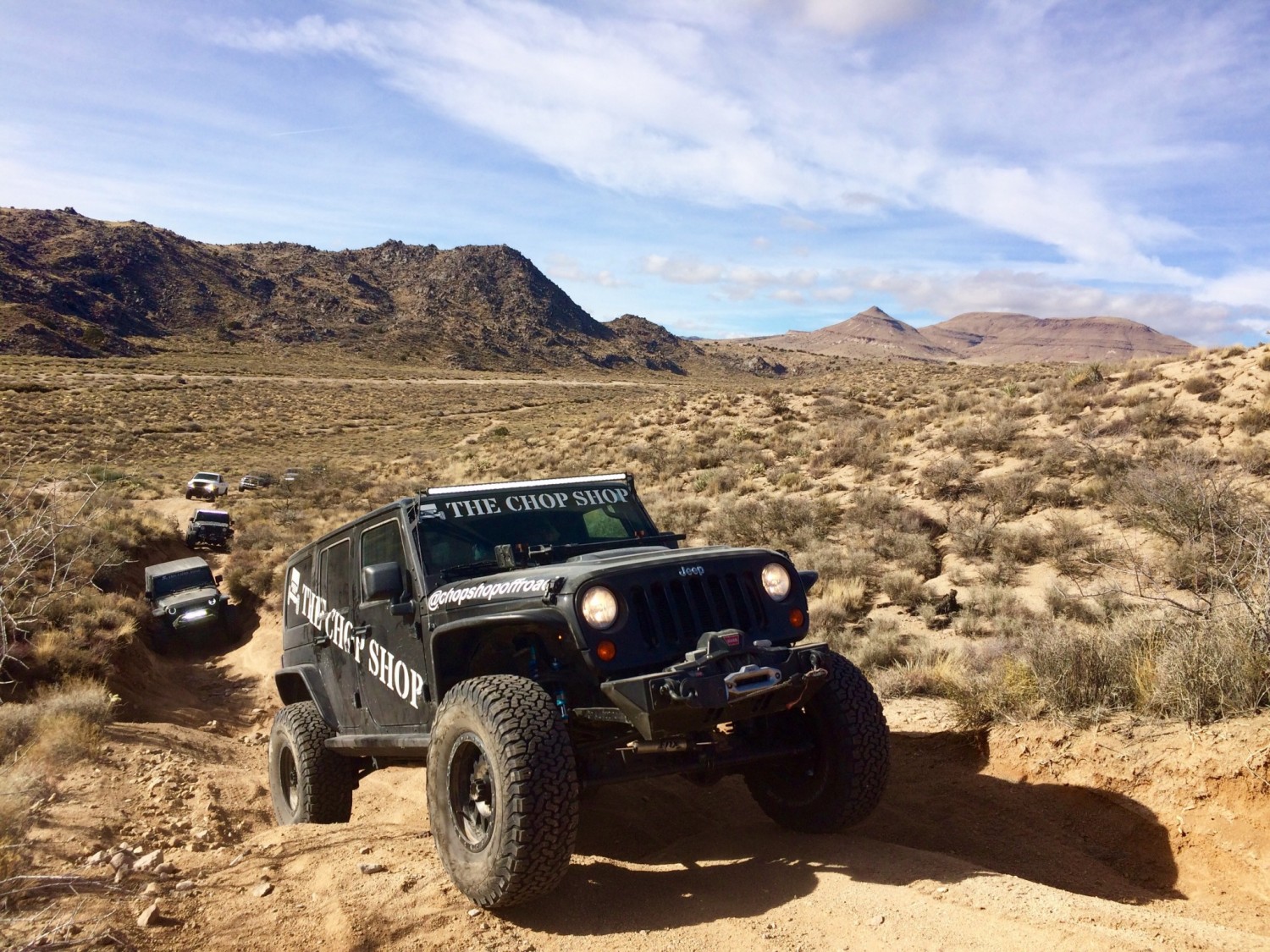 dude, send me the bleepin’ details!

He sent just one text a few days before the trip that said “bring a backpack of supplies…needed to survive.” I was hoping for a detailed pack list and trip summary, but just as I had hoped the selfie craze was a fad, I was sorely disappointed. It took my whole family blowing up on him with angry emoji texts to eventually get a few details. Up until two days before I left we didn’t know when or how I would get home and that I needed to bring my own food. 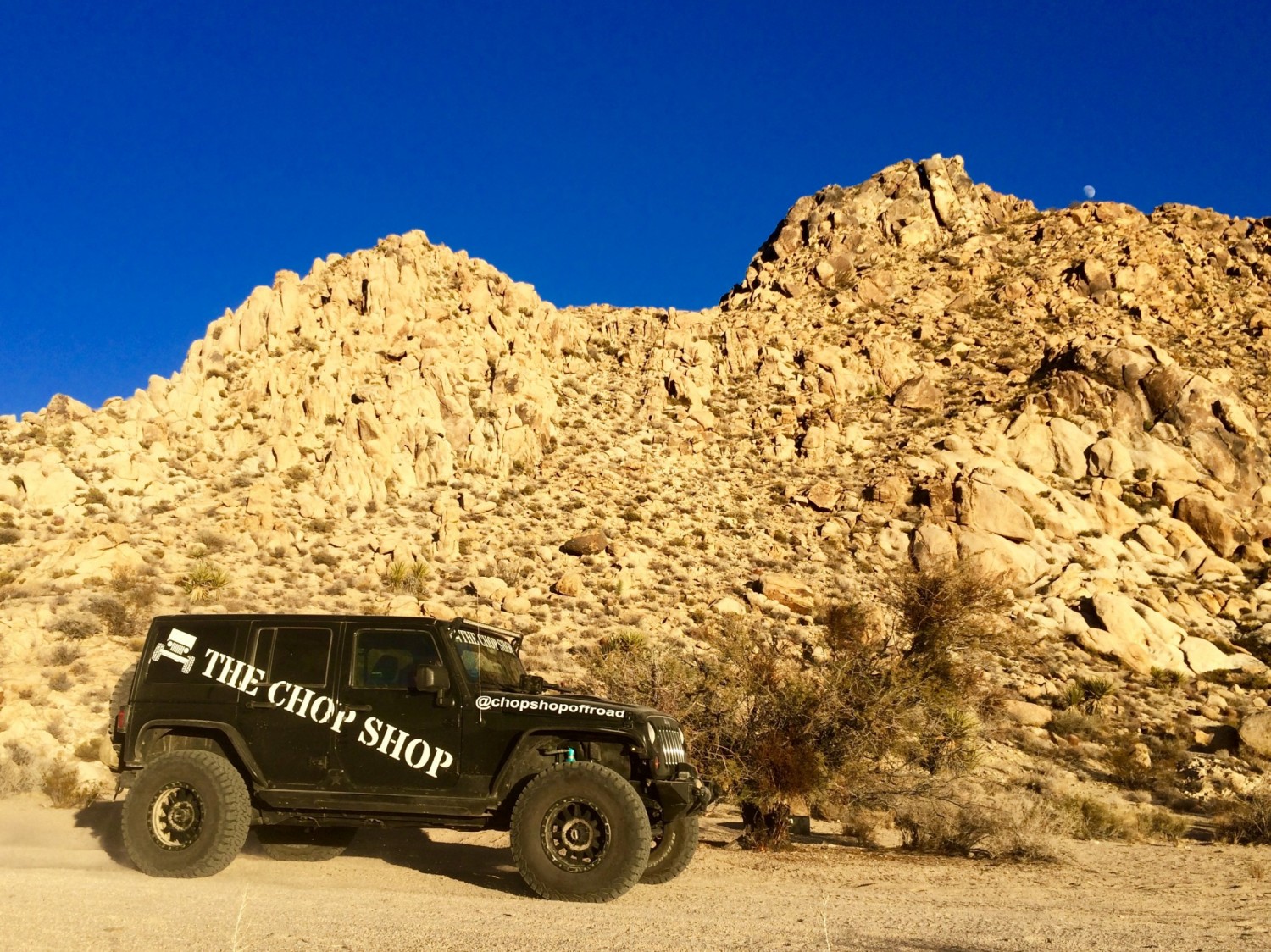 There would be 7 of us on the Mojave Trail in 5 jeeps. When was the last time you were able to get 7 adults together to go on a 3 day expedition? Sadly, few people have the time to get away from the money grab of life. I guess it takes the commanding leadership of an off-duty army officer to pull off this type of feat. Either way, Sesar and The Chop Shop put together one hell of a jeep trip. 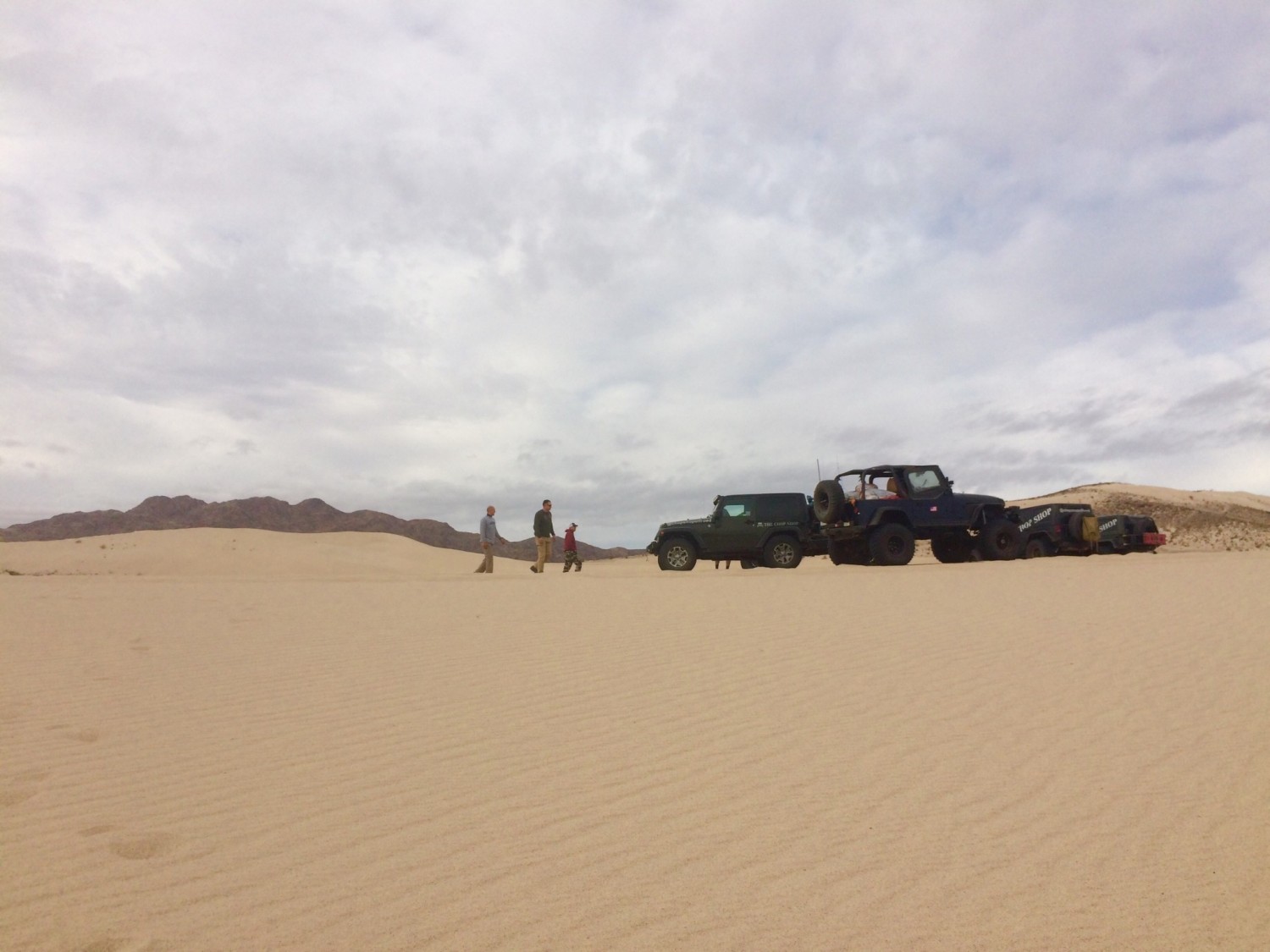 many battles were fought on this trail

In preparation, I did some rigorous research on this new website I found called Wikipedia. I also yelped it and asked Jeeves but was not nearly as successful there. Anyways, I learned that the Mojave trail is a 140 mile trading route originally created by native Americans that connects the various watering holes in the Mojave Desert. It starts near Laughlin and finishes at Barstow. 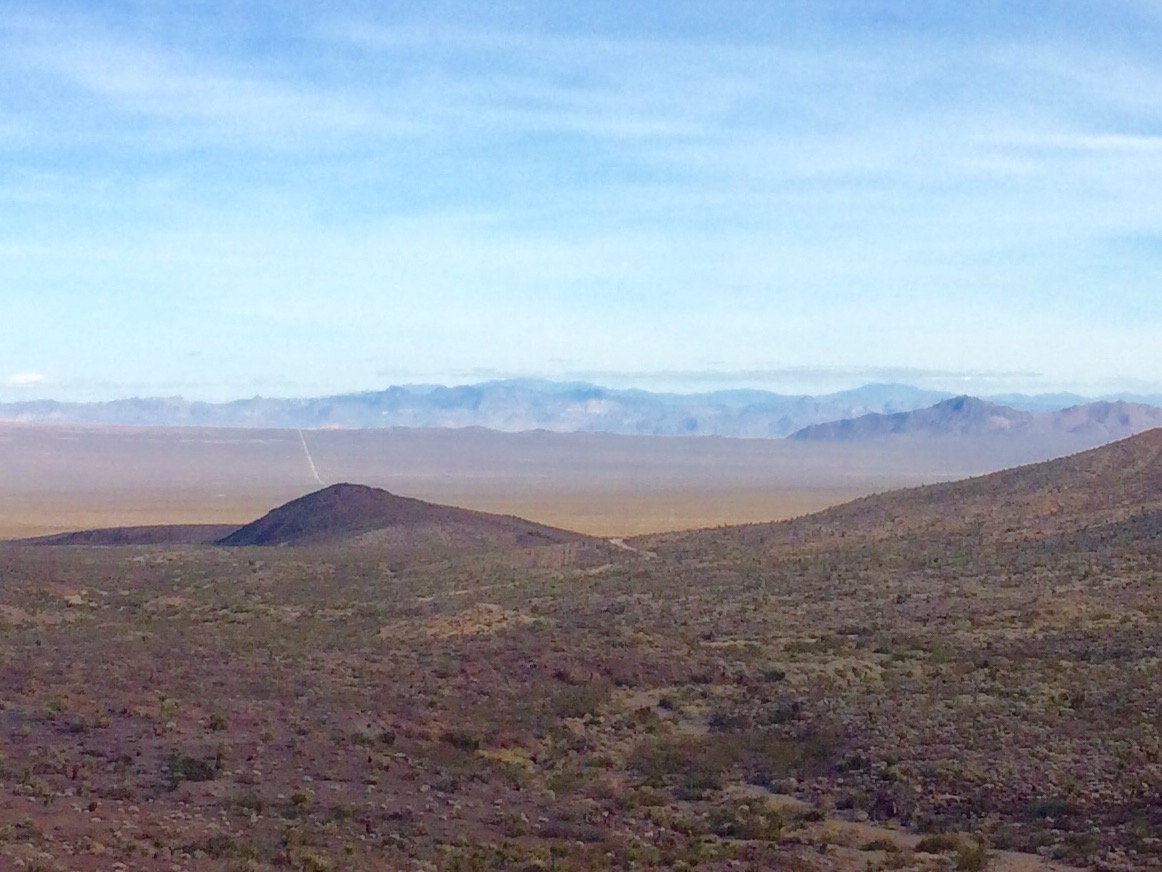 It was later used by Spanish missionaries and every other foreign colonizer that came to the area including American pioneers and forty-niners heading west to find gold in California. It’s a true Wild West trail where many confrontations occurred between Native Americans and incoming colonizers. Think of The Lone Ranger and the stuff that Louis L’amour books are made of, but this is the real deal. 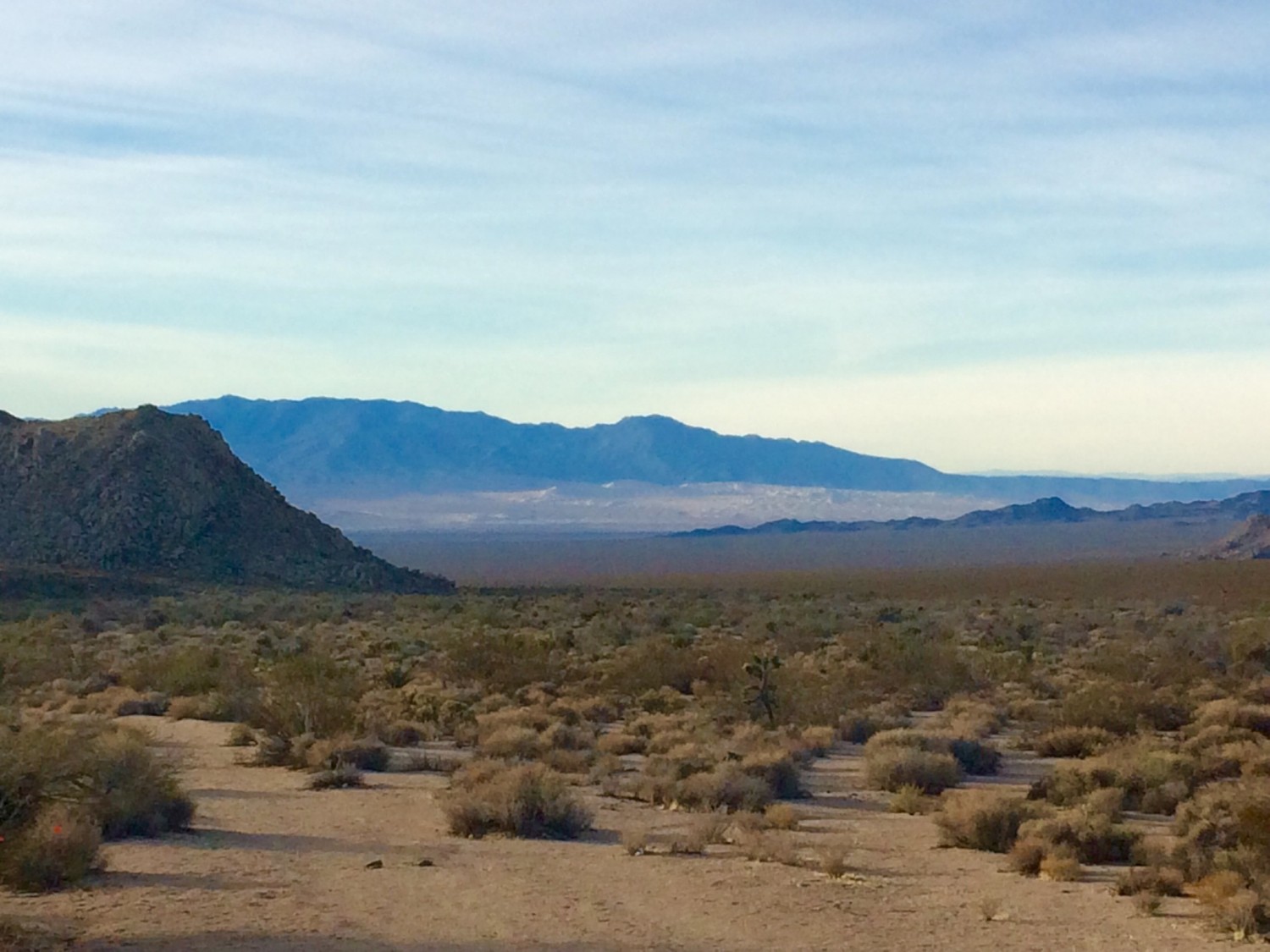 Today, the Mojave Trail is a 4-wheel drive dirt road for us weekend warriors in mid-life crisis. The national preserve is believed to appear much the same as it did hundreds of years ago. It’s not a slow rock crawling expedition like the Rubicon Trail. It’s a high speed adventure through huge expanses of waterless uninhabited desert and thick sand. The primary dangers are the trees and rocks that you have to avoid as you bounce and swerve through the often narrow trail at high speeds. 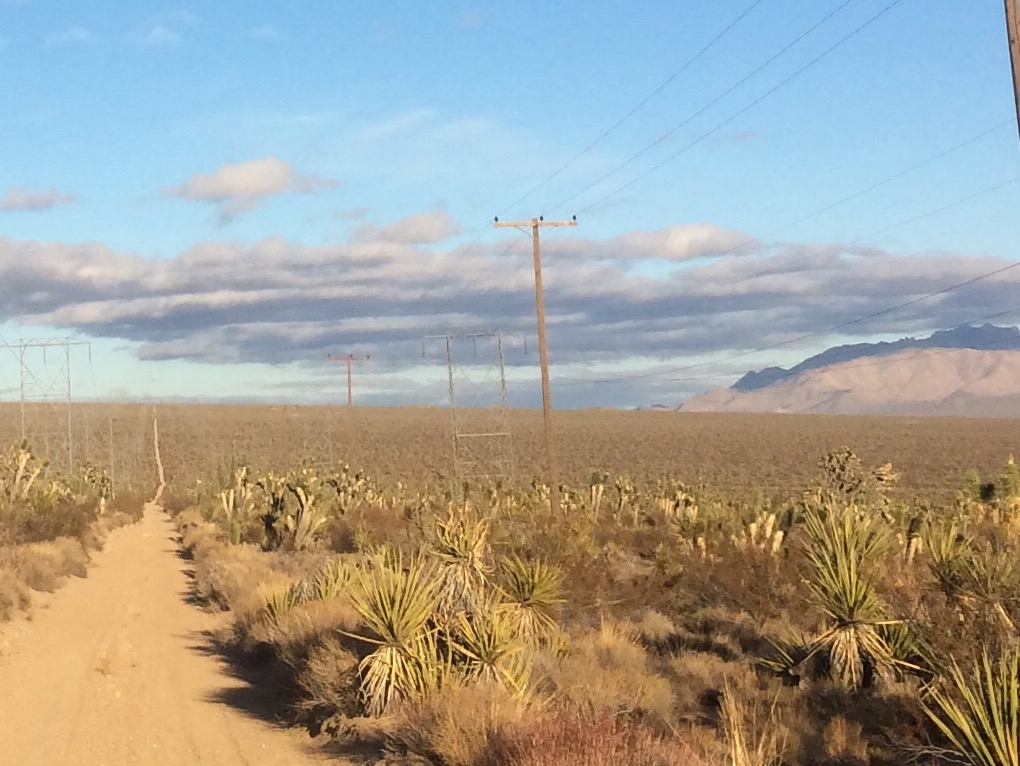 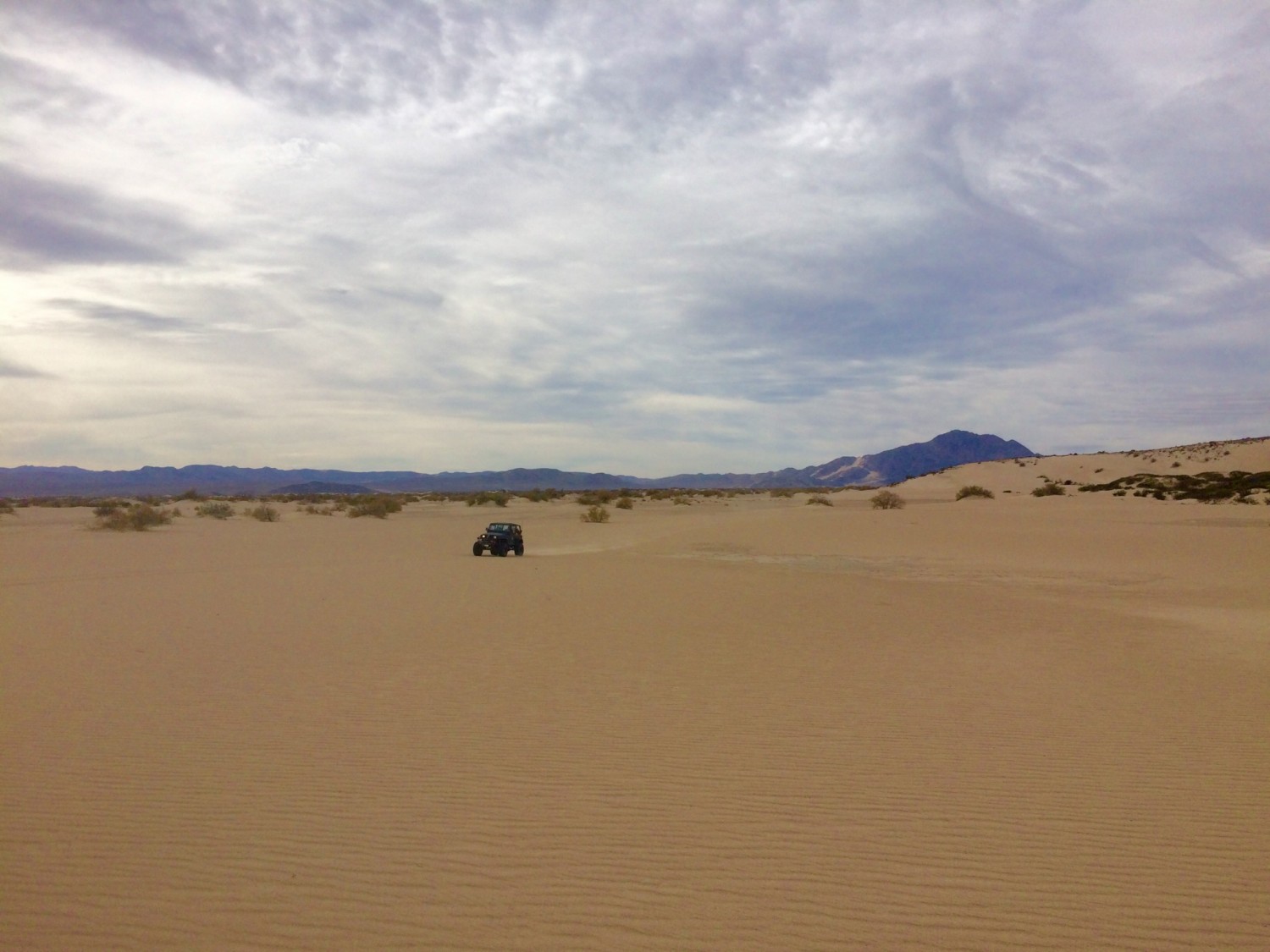 The other major obstacle is that there are very few markings along the trail so it’s easy to get lost. After reading this, I asked Sesar if he had ever done the trail before. He assured me that he had taken tanks through the trail with the army as well as recreational jeeps. I’m happy to hear this, but a scene from “Ferris Bueller’s Day Off” flashes into my head. I picture the valet who takes a joyride in Cameron’s father’s 1961 Ferrari minutes after saying “Relax…you guys have got nothing to worry about..I’m a professional.” 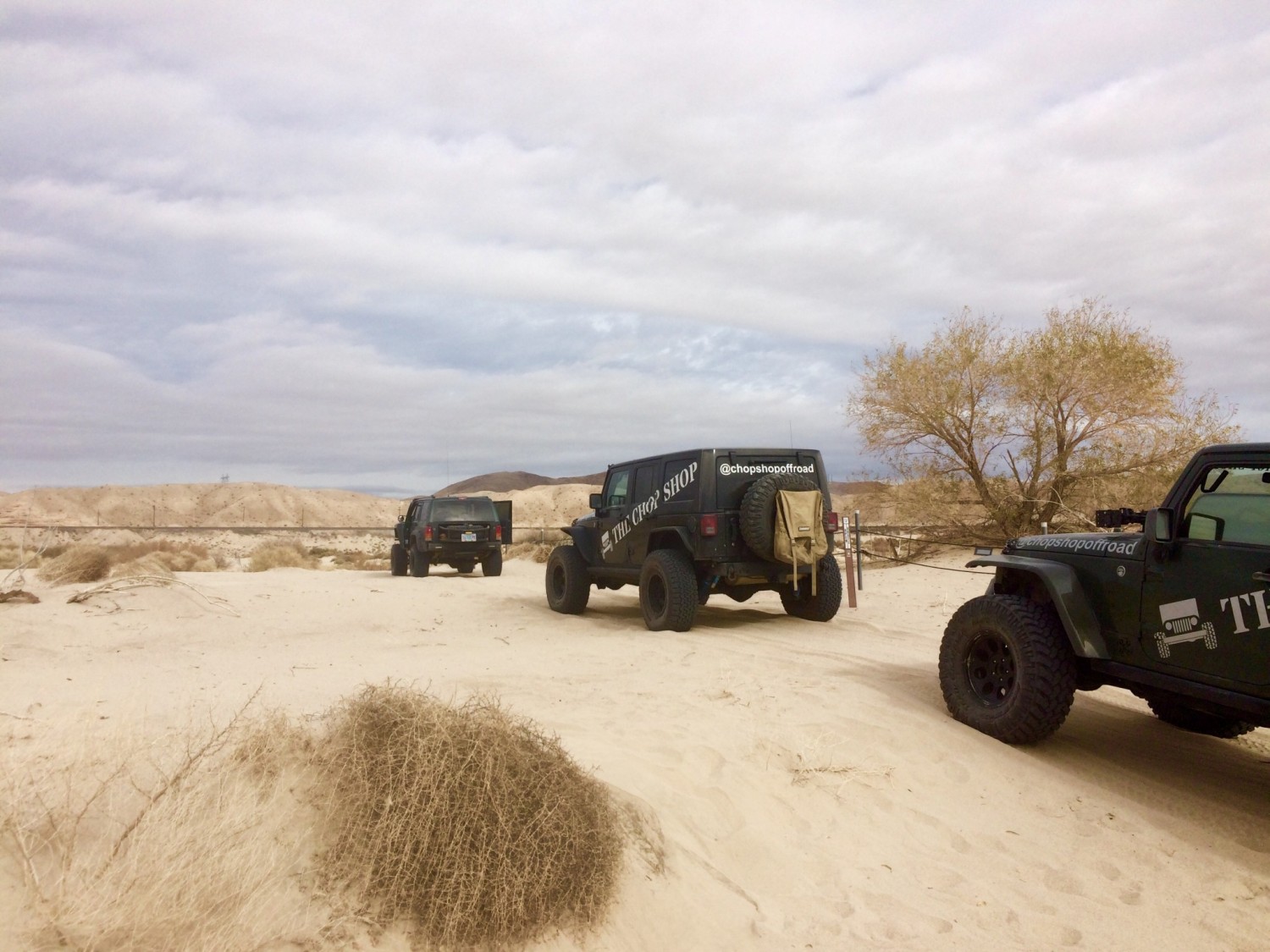 Nonetheless, after Sesar’s reassurance and after learning about the rich history of the Mojave Trail, I was all in. We had already taken four jeeps rock crawling through the Rubicon trail without getting stuck once. This should be a cake walk. Anyone suspect that I might have just jinxed the trip? 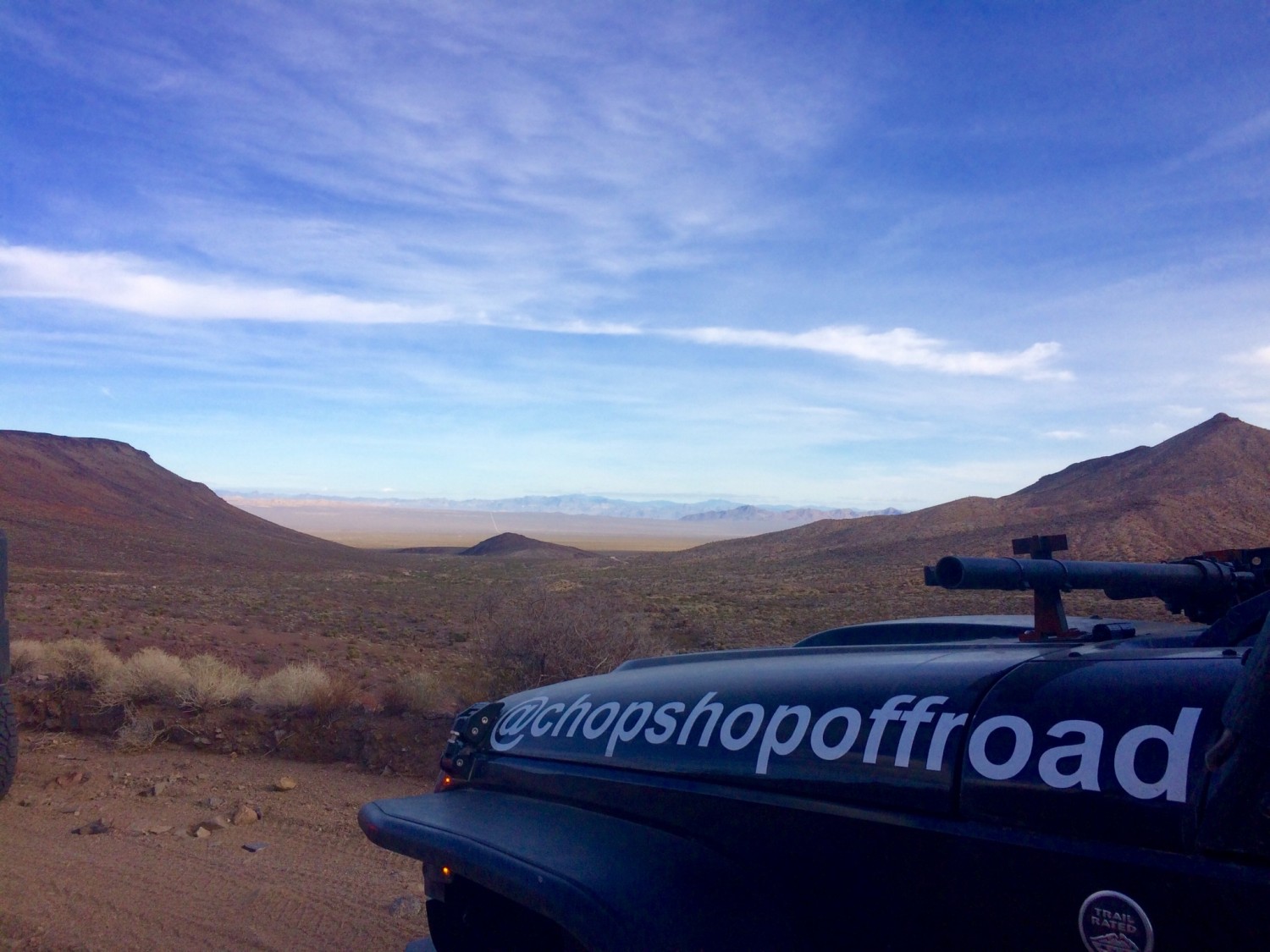 probably the wrong place to leave a prius in barstow

I arrived in Barstow Thursday night and paid to leave my car in a reserved spot intended for 18 wheel trucks at the Flying J truck stop. We laughed at the ridiculous sight of my tiny car parked amongst 30 big rigs in a spot that could fit 5 of my cars. As We drove away in Sesar’s jeep, we imagined what the weary long haul truckers would do to my Prius that was occupying the last reserved spot. They probably wouldn’t think it was as funny as we did. 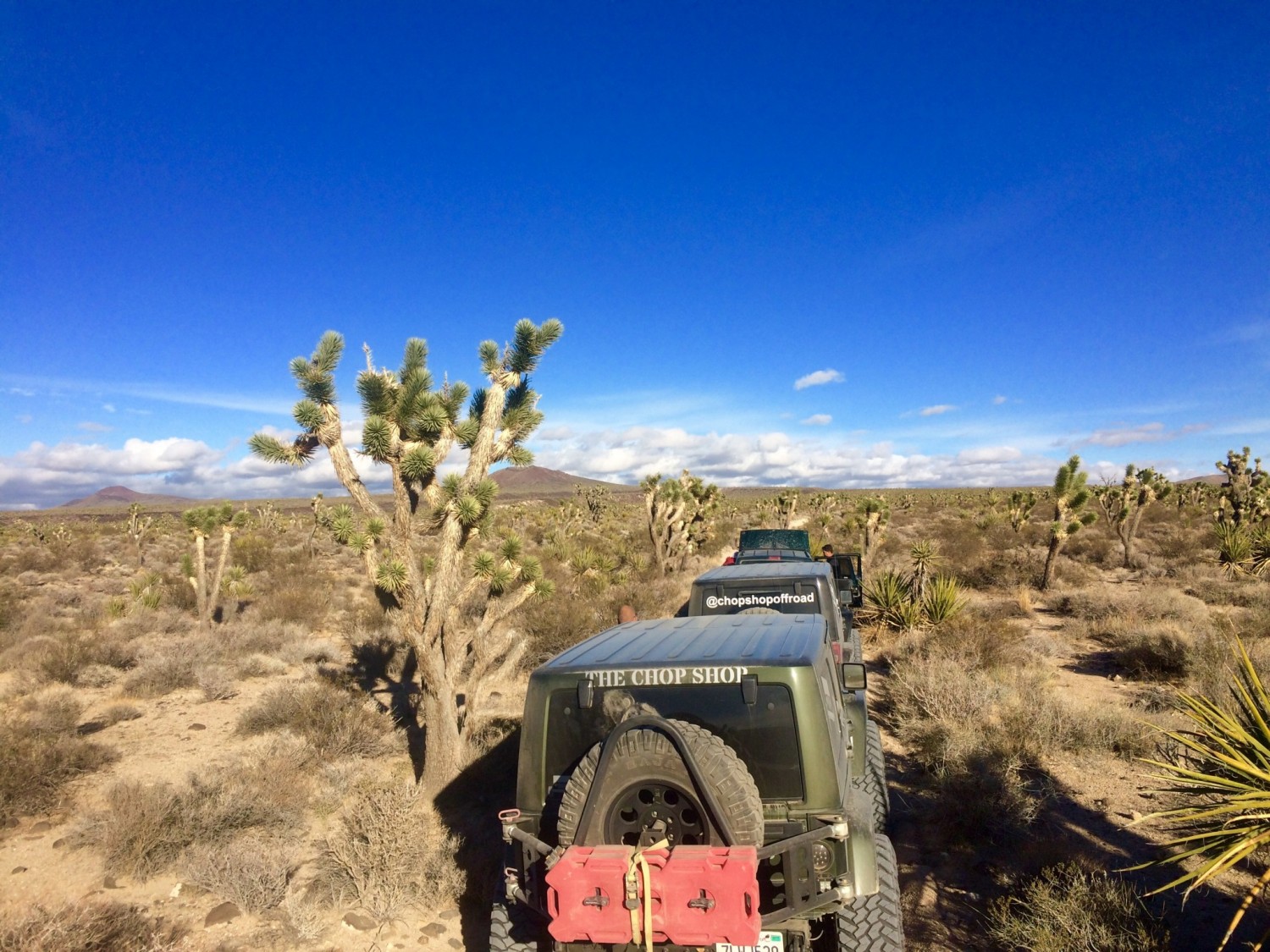 We headed into the desert just a few hundred yards off the highway to camp for the night and wait for the others to arrive. Camping in the desert is so easy. You can just unfold a cot and sleep under the stars with no worries of bears or mosquitos. 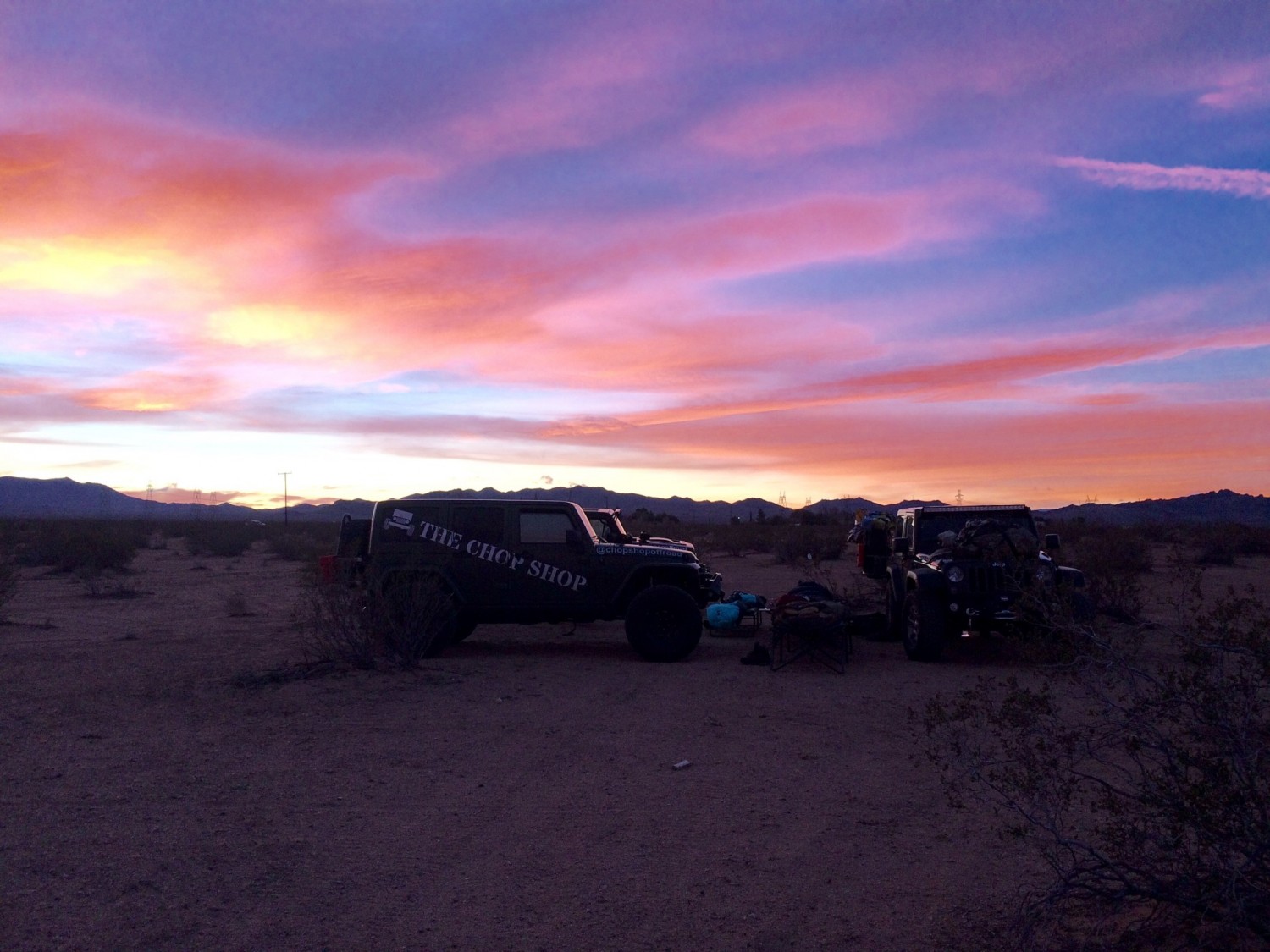 We hung a strobe light so the other jeeps could find us. Eventually, we saw headlights veering off the highway and bouncing into the desert towards us. Let the games begin! 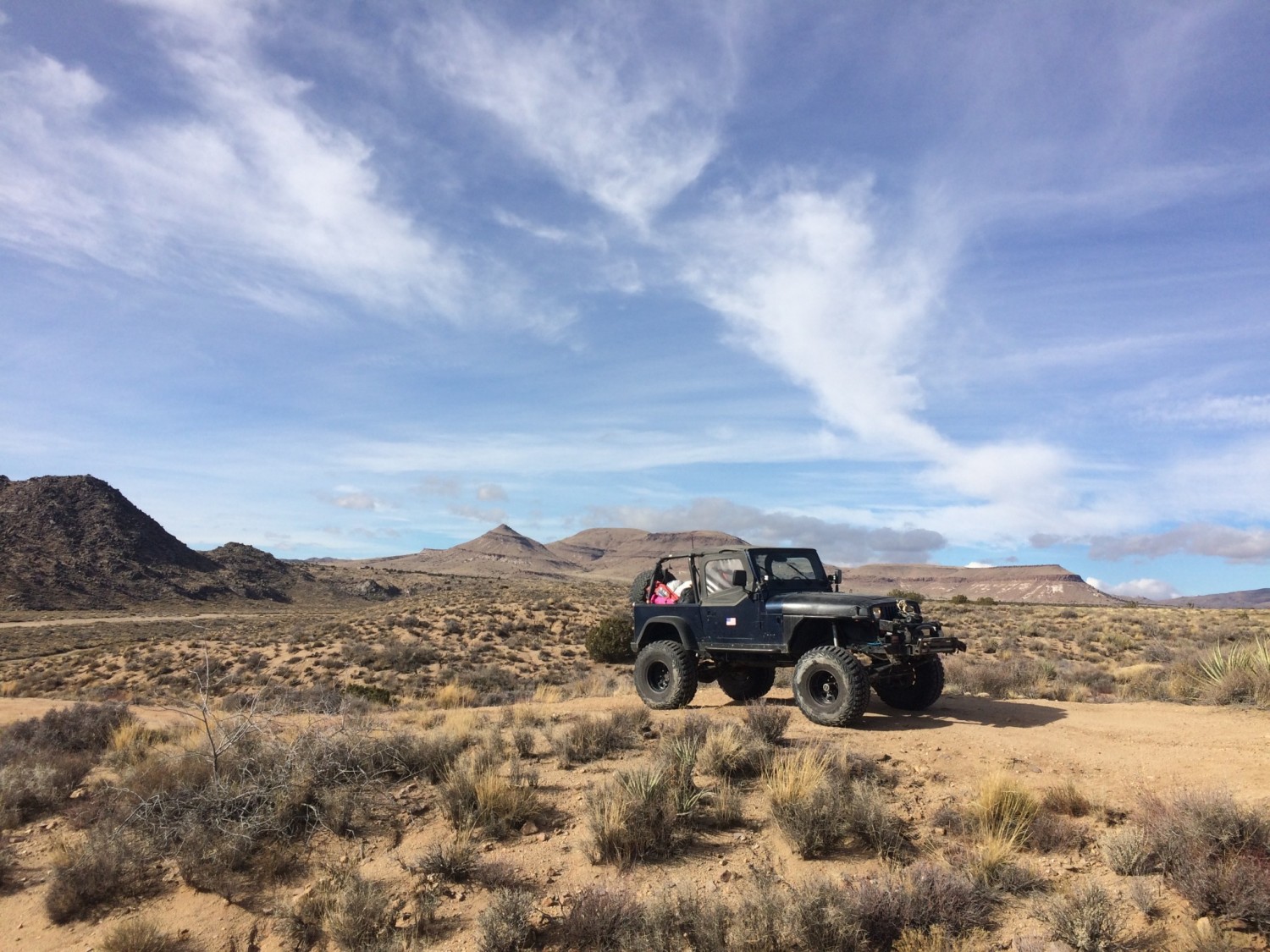 embarking on the historic desert trail

We woke at sunrise and began heading east from Barstow on the Mojave trail. We flew through the desert at speeds ranging from 30 – 70 mph. There is so much dust flying around that you can barely see. If there is a rock in the middle of trail we will be airborne. I double check my seat belt to make sure it is catching properly, and Sesar says “relax, you got nothing to worry about.” Once again, I picture the valet from “Ferris Bueller.” 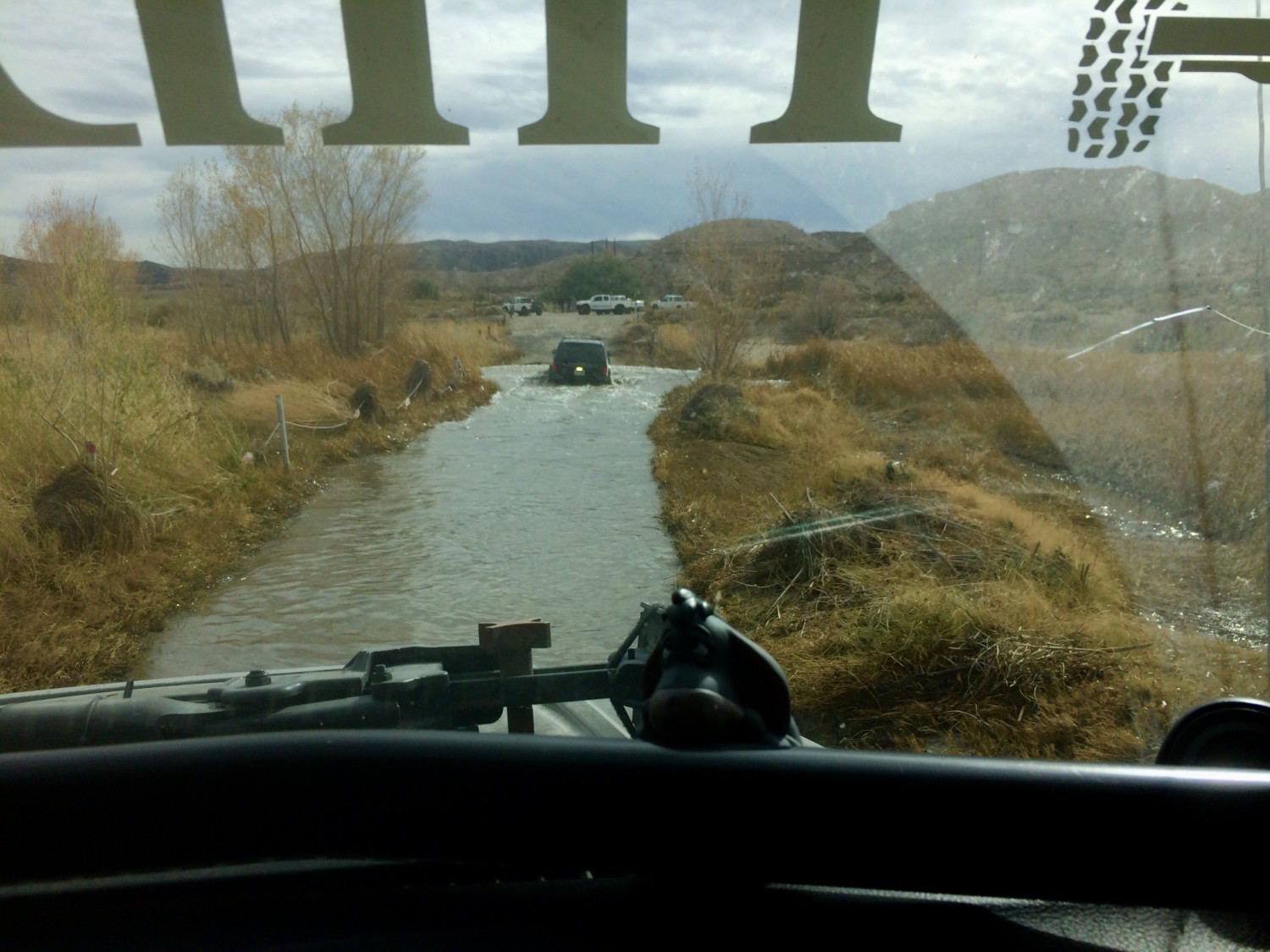 Less than an hour into the trail we encountered the Mojave River crossing. I figured we would stop and check the water depth to see if we could make it through. Instead, Kevin, who is leading the caravan just charges straight through so we follow right behind. The water seemed like it was going to swallow our car, but it was too late to stop. Our only choice was to power through to the other side. 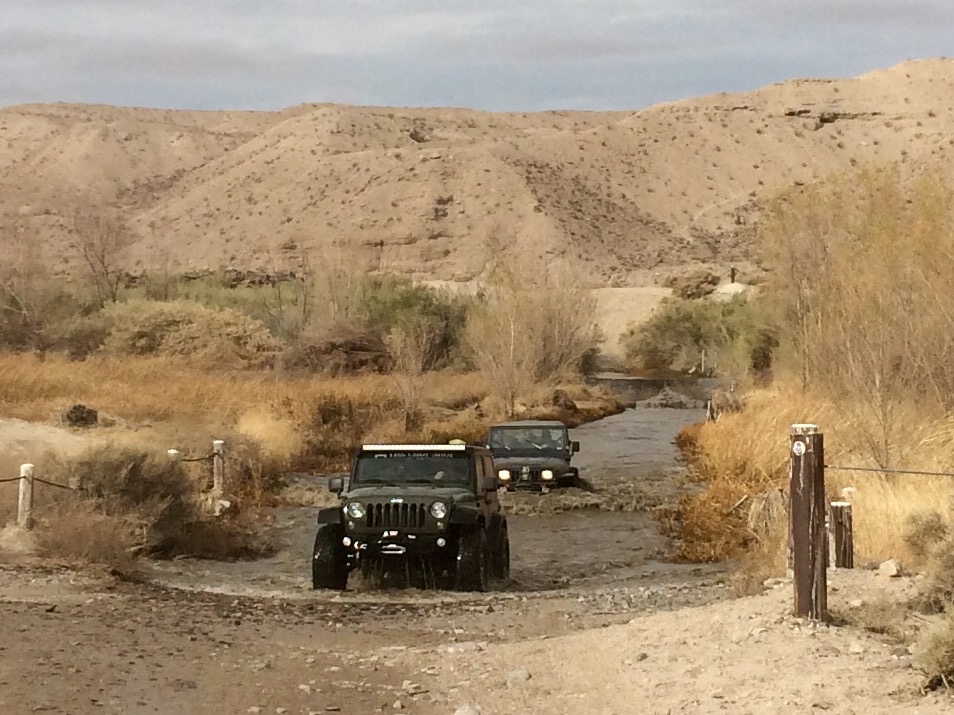 After the river crossing we stopped at an old bridge with train tracks. I assumed it was no longer in use but as soon as I climbed the bridge for an aerial photo a train came roaring by a few feet from me. The conductor sounded pretty angry as he honked his horn, but I’m surely not the first idiot to pull that stunt. 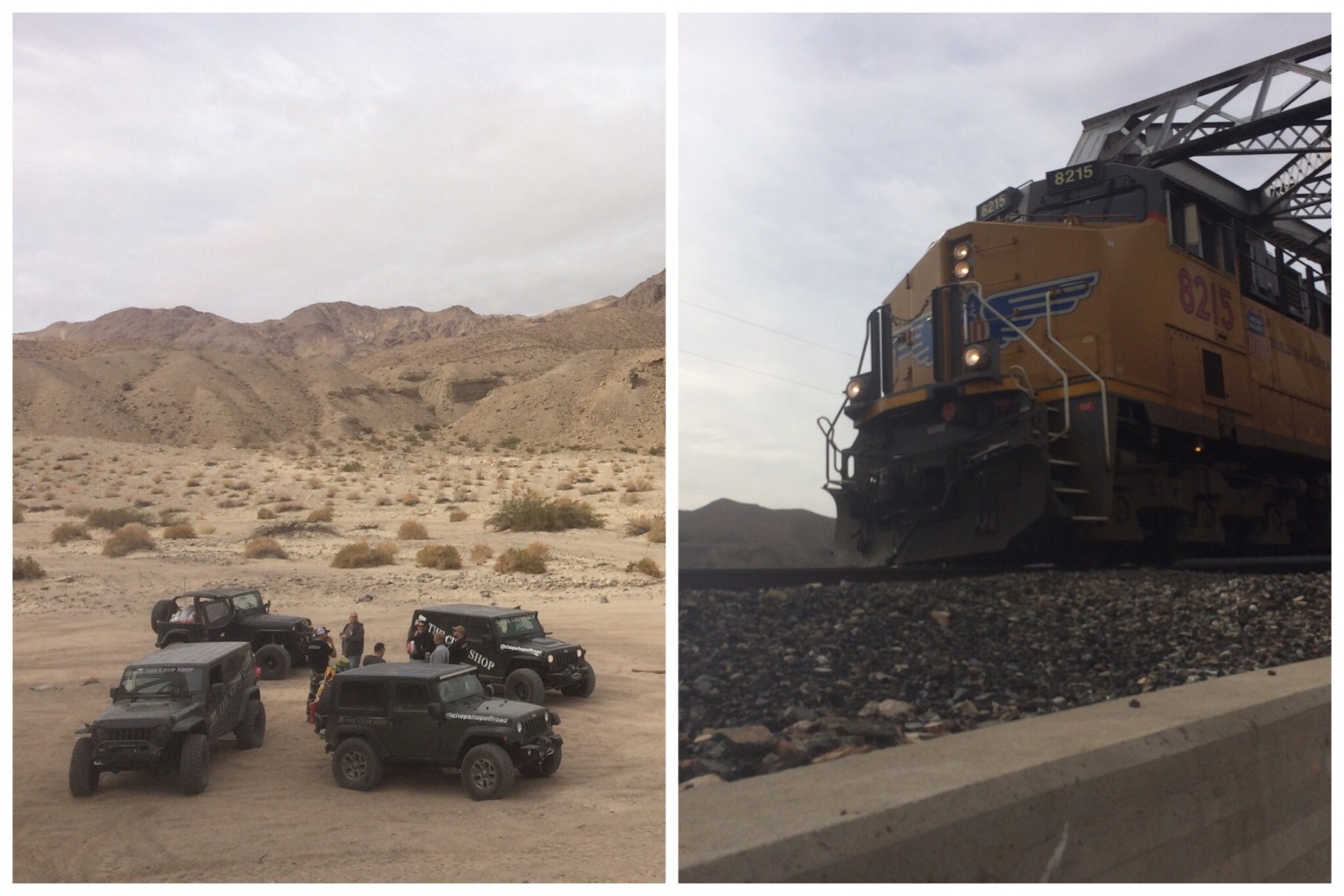 “don’t touch it, it might be a crime scene”

We continued on until we came across a relatively new abandoned Challenger in the middle of the desert. It looked like a crime scene but after finding no dead bodies in the backseat, we came to the conclusion that some teenagers were probably just having fun riding their trucks over a broken down car. I was reminded of my Prius I left at the truck stop and figured it probably looked a lot like the challenger by now. “You got nothing to worry about,” Sesar says laughing. 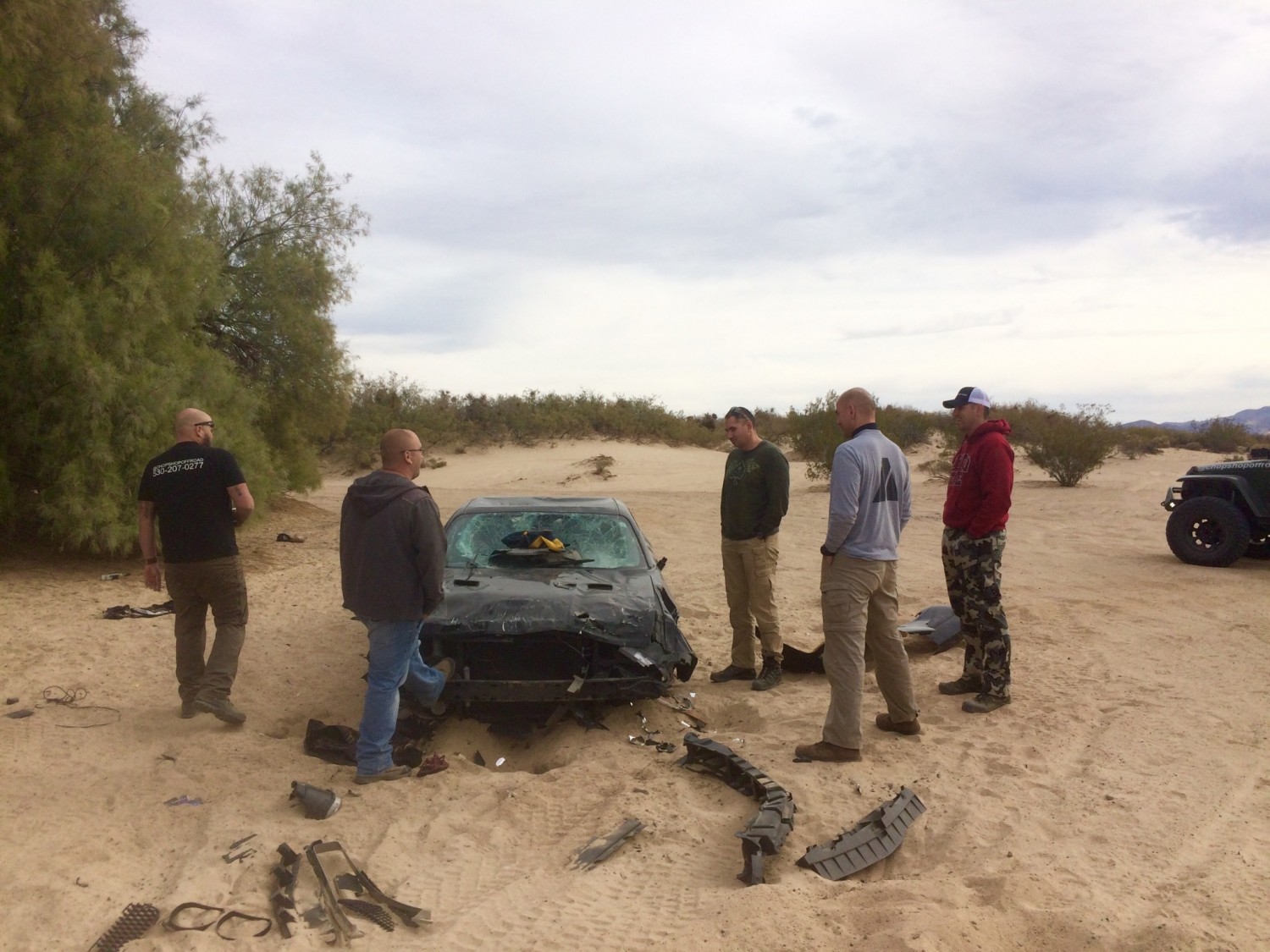 on this day, some very cool stuff went down…

Travelers monument was our next stop on the trail. Everybody got out of their jeeps and threw a rock onto the pile for good luck. There is a secret plaque on top of the rock pile, and tradition dictates that only those that travel the Mojave trail get to read it. The profound message can be life changing. 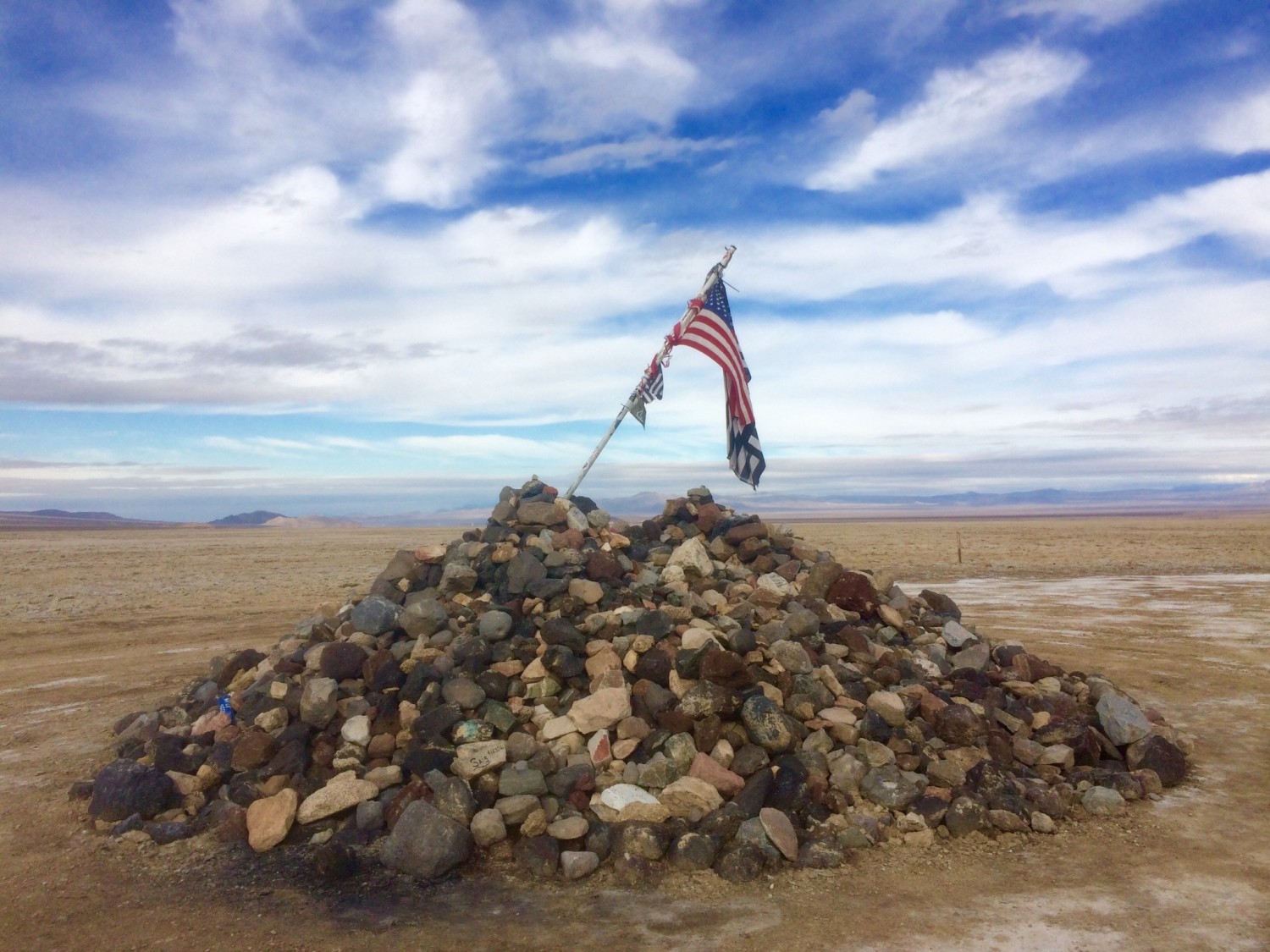 Eventually we reached a beautiful forest of Joshua trees. Apparently, the area is protected for a rare species of gnomes and frogs. When Sesar told me to bring a small porcelain gnome and frog, I assumed it was an inside joke. Sure enough, everybody else brought items to contribute to the growing population of porcelain figurines. I still don’t know why. 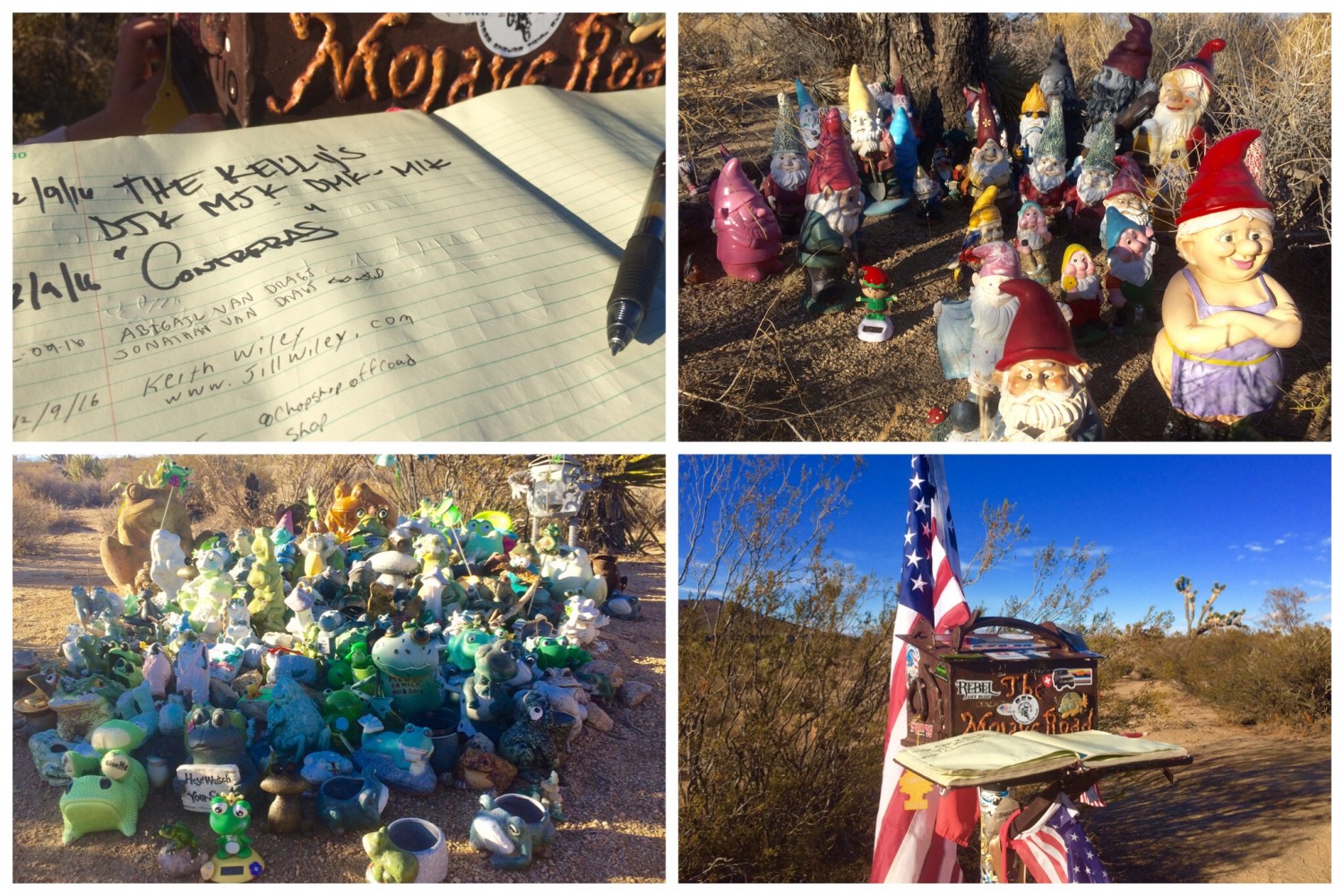 Afterwards, we signed the log book and continued on our journey. We eventually found a nice campsite near the base of a mountain before sunset. Sesar offered to let me try his Eno hammock he had been raving about. I was plenty comfortable on my cot the night before but I obliged and he took my cot. I woke up freezing in the middle of the night just waiting for the night to be over. Morning finally came and Sesar boasted he was so warm on the cot that he was nearly sweating. Army guys get a kick out of pranking city boys. 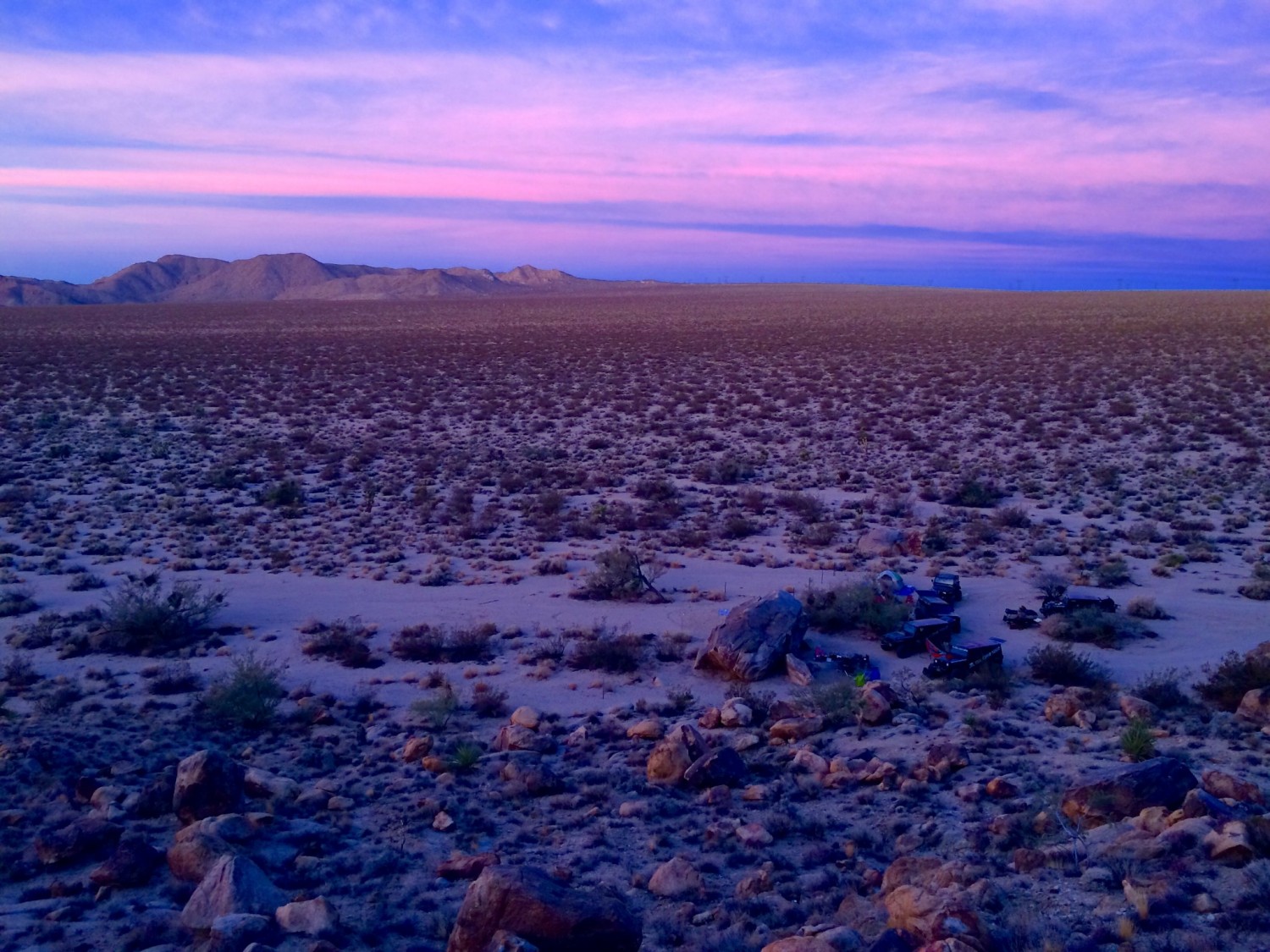 The next day three more vehicles joined us on the trail bringing our caravan to eight jeeps and trucks. This gave us new blood to banter about shocks and coils with and tell our lies to. It wouldn’t be a jeep trip without at least one mishap, but we managed to put out an electrical fire with some quick thinking (not water!). Afterwards, we paid the toll to the penny can hanging from the tree and continued on the last straightaway at top speeds. “We just hit 80!” someone called out over the radio. 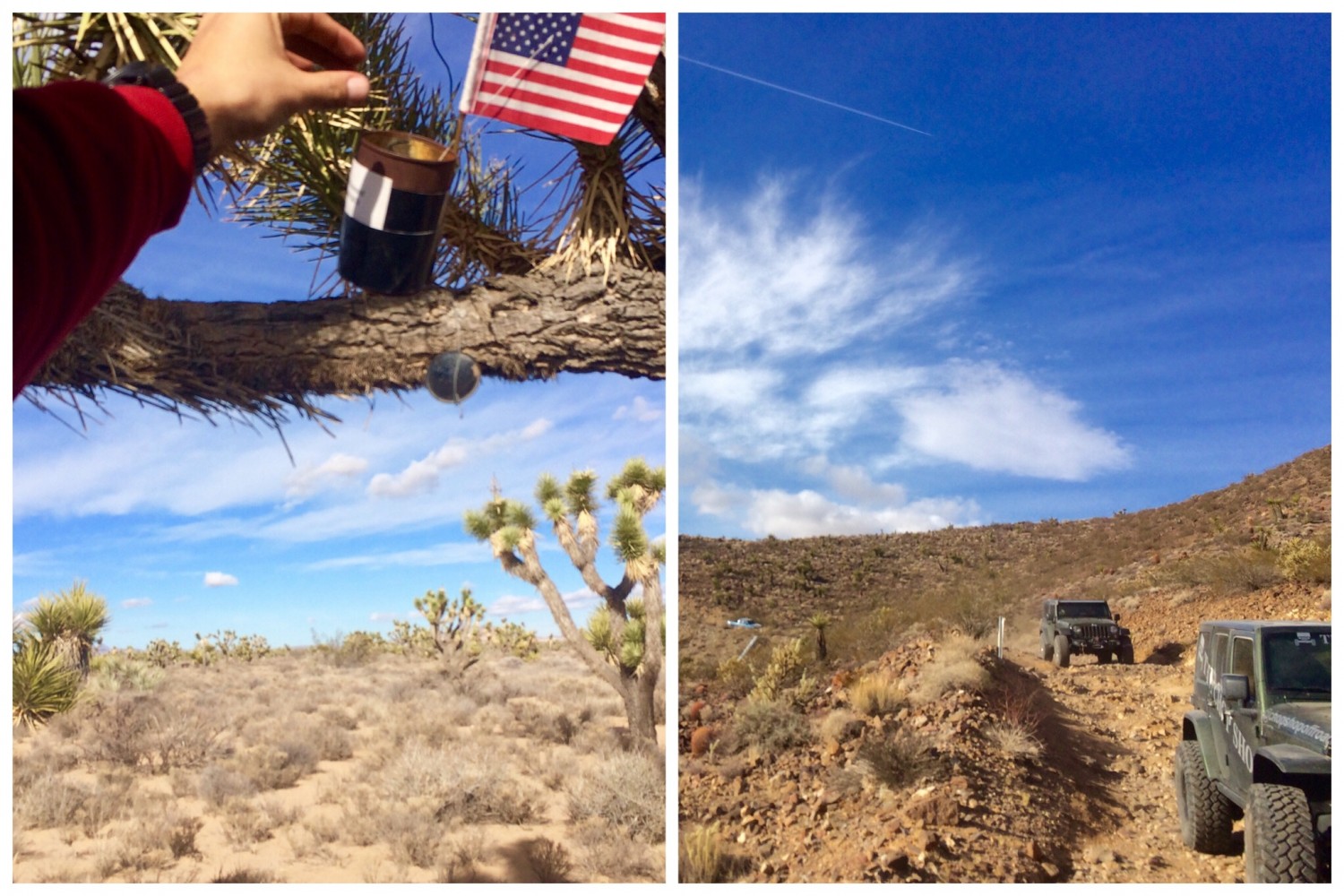 We reached Laughlin before sundown and celebrated with a huge buffet and more jeep banter. The moment of truth came the next morning when we pulled into the truck stop in Barstow. My Prius was right there where I left it without a scratch. I guess maybe truckers do have a sense of humor. 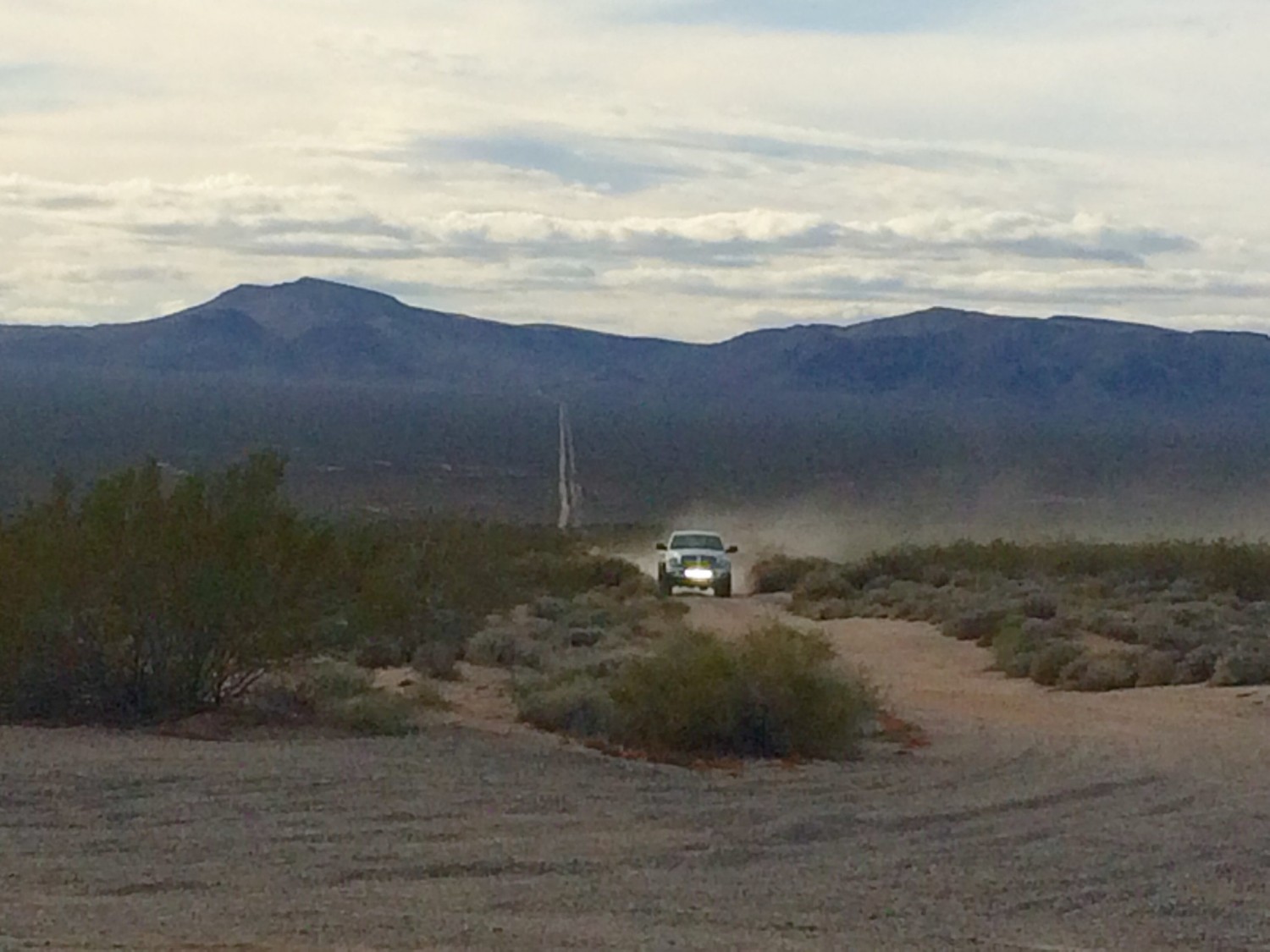 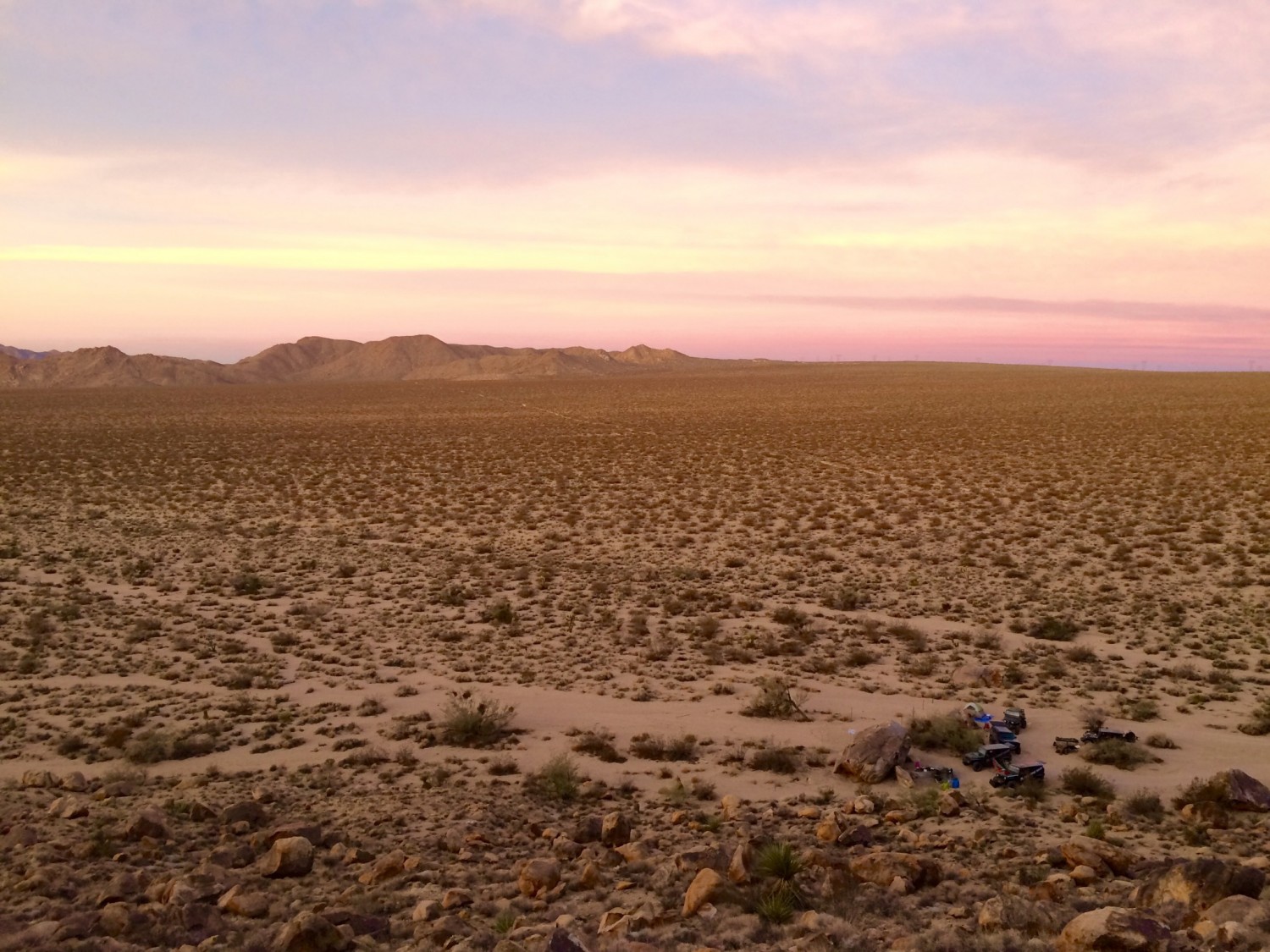 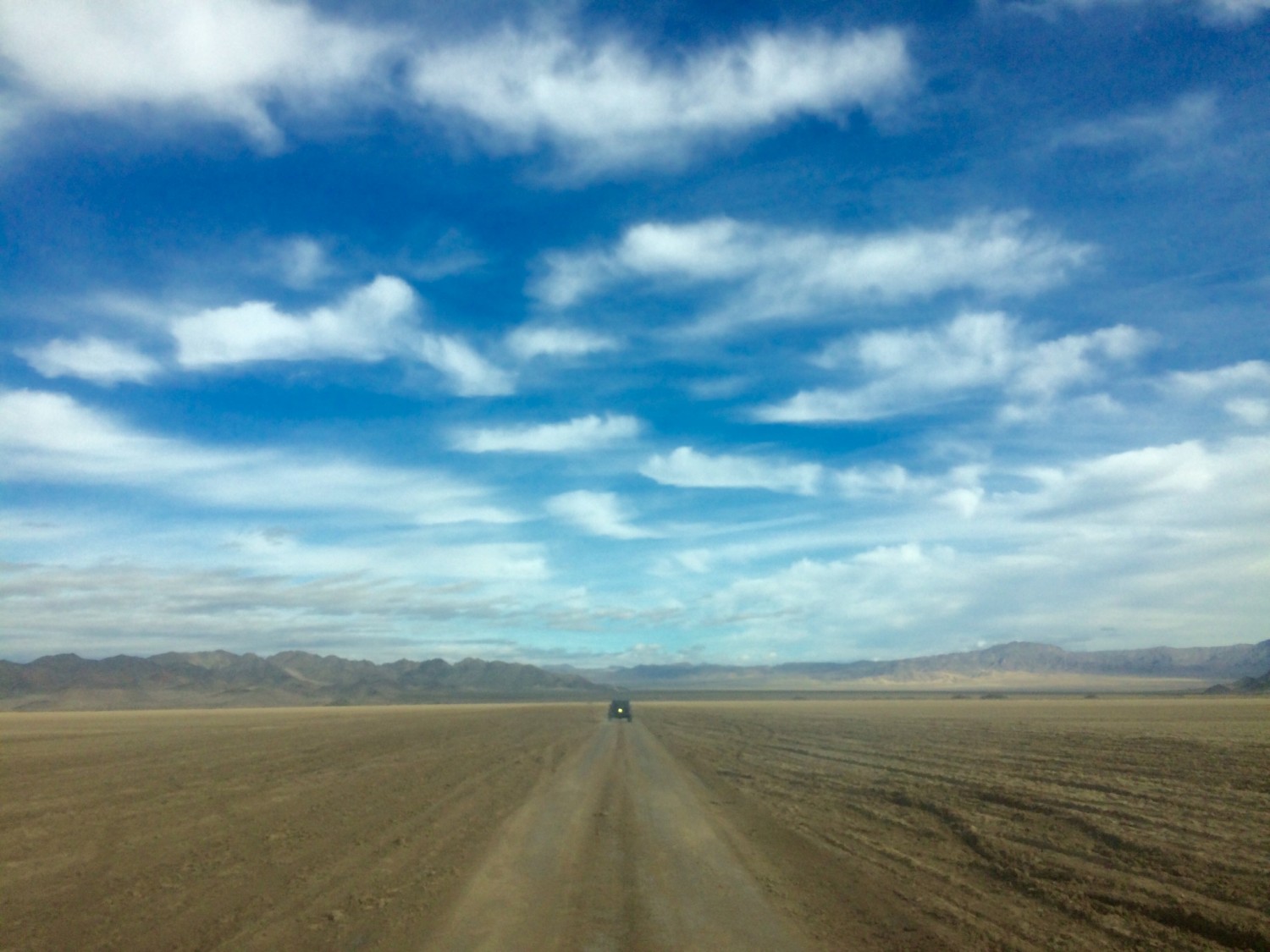 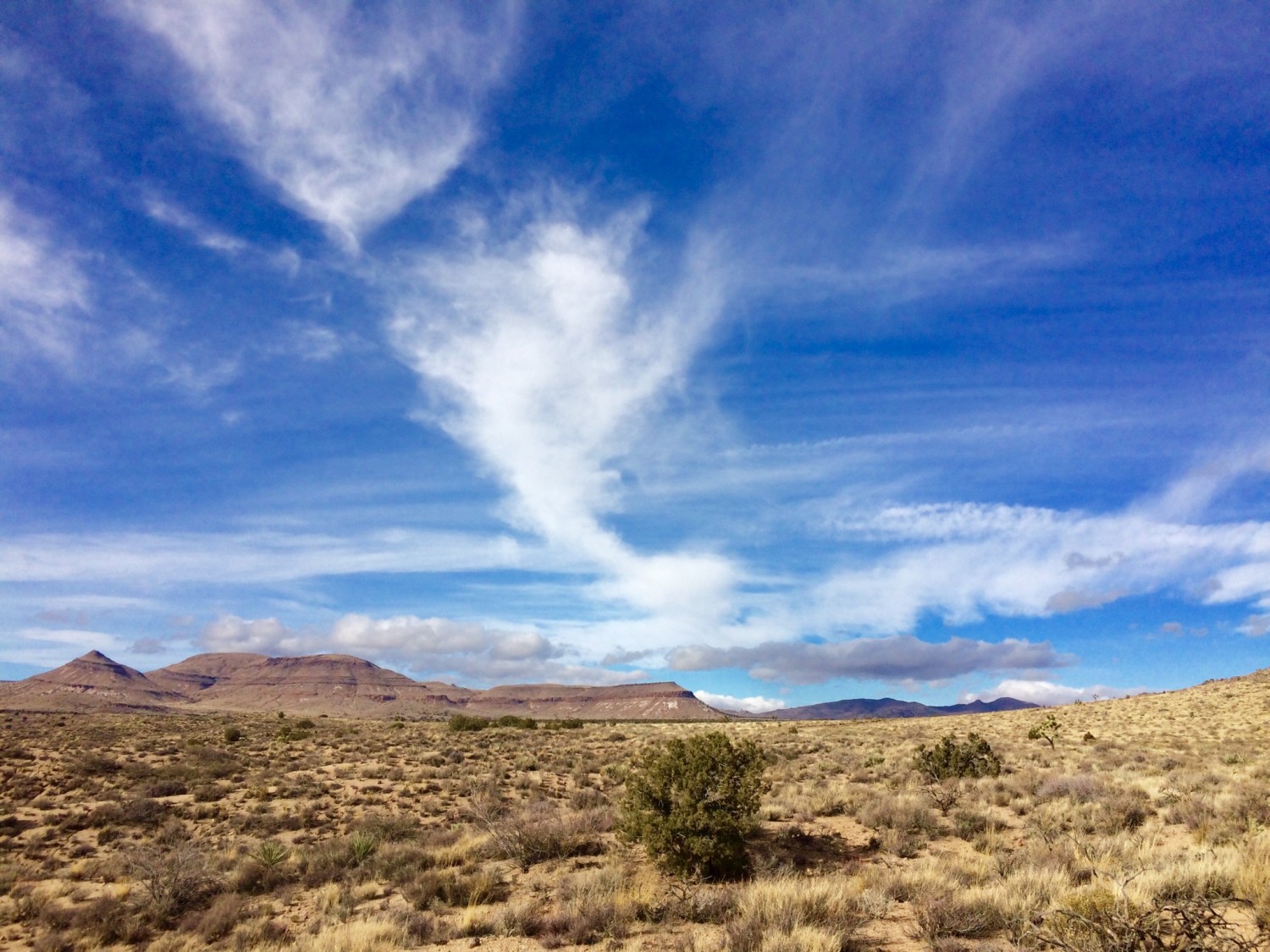 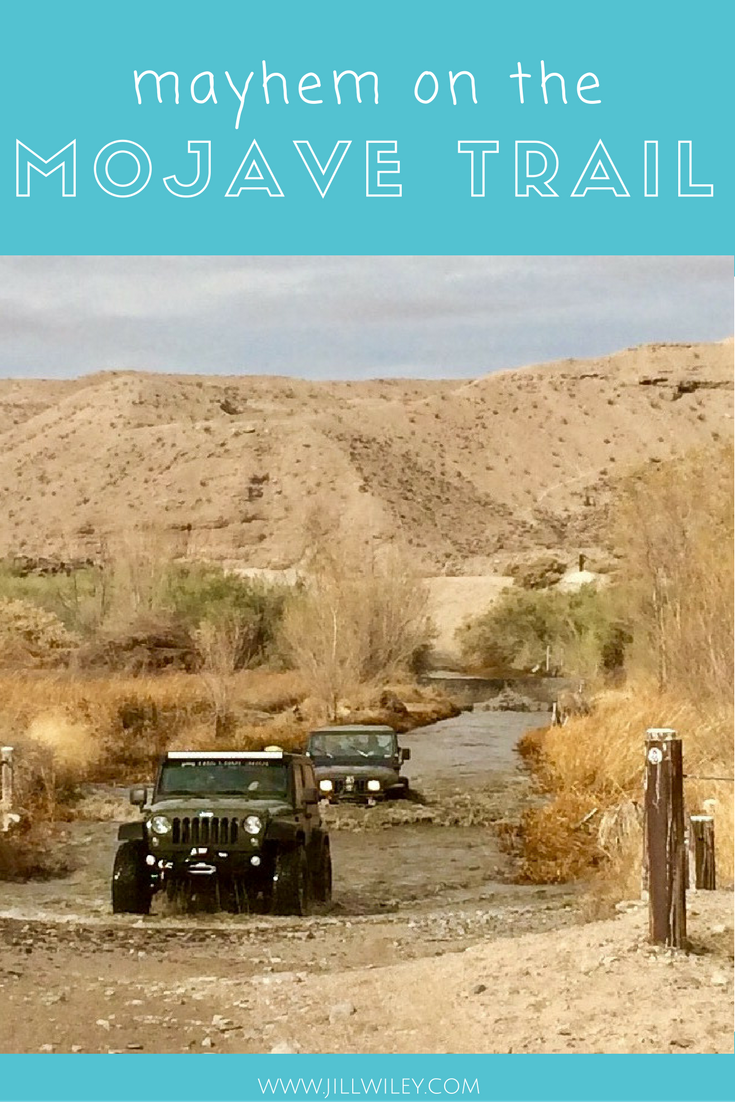